On this day, the firm “Yukos USA Inc” started using machinations in Texas

A table, a chair, and a home-based worker Misamore. The firm Yukos USA Inc” was a shell company. Accounts were made “retroactively”. The website Prigovor.ru reminds its readers of what happened on December 14, 2004.

On this day 18 years ago, on December 14, 2004, The Oil Company Yukos made a loud announcement in the press informing that in the Court of South District of Texas (Houston) “a voluntary legal statement on reorganization” was filed, more precisely, on bankruptcy. "The main shareholders," asked the Court to call off the auction sale, announced by the Russian Fund on Federal Property (RFFI) concerning the auction to sell a stock of shares of the firm “Yuganskneftegaz" and to oblige Russia to solve the question of tax arrears in arbitration proceedings. In the USA, a petition of bankruptcy gives a company a defense against the demands of all creditors during business restructuring.

The tax swindlers wanted to derail the auction to sell the company “Yuganskneftegaz”, the main milking cow of Yukos. By the way, it’s Khodorkovsky’s team of “effective” managers that had been intentionally pushing “Yuganskneftegaz” into debt.

THE TEXAS JUSTICE – DARING AND MERCILESS

That is why everything looked like just another hastily glued together manipulation. It suffices to say that on December 14, 2004, the documents to the Court in Texas were filed not by the Oil Company Yukos, as all foreign and many Russian publications were blaring, but the recorded in the registry on December 14, 2004, the firm “Yukos USA Inc” (Texas, tax identifier 32016359021).

As directors of this “American Yukos” were itemized the usual persons – Bruce K. Misamore, David Godfrey, and Steven Michael Theede.

Thereat, this firm at the moment of filing the petition to the Court, was, actually, a shell company. It was created for Yukos to be formally presented on the territory of the United States in order to create an illusion that Yukos was actively doing business in America. In fact, there were only – a table, a chair, and Misamore. 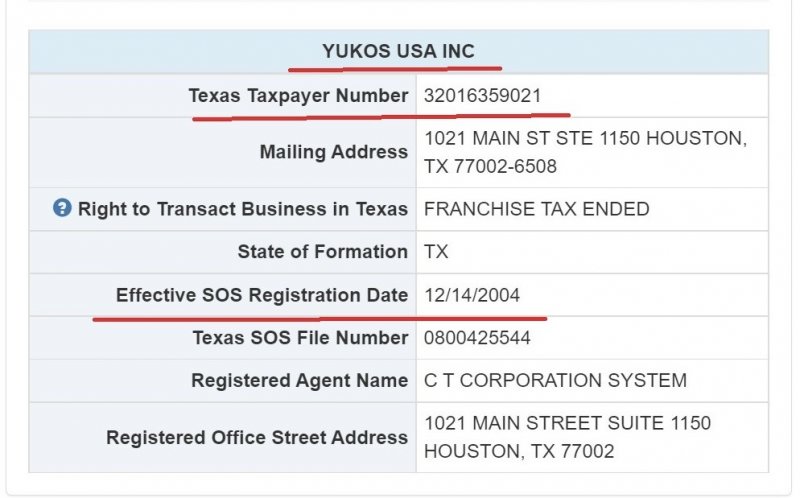 In time, he admitted and said that “at present on the territory of the United States works only one employee – he himself”. There was, in earnest, even no meaningful money on the accounts of this “powerful flagship of American business” on the day of the reviewing of the materials in the Court. It was also admitted by Misamore, thus confirming the suspicions of lawyers of a German bank who told the Court that “part of the documents relating to the transferring money to the accounts of “Yukos USA Inc" was prepared only after December 14, 2004, and were marked by earlier dates – i.e. “retroactively”.

Apart from that, it was found out that Misamore had came to Houston on December 4, 2004, and from that moment, he had been busy with the registration of “Yukos USA”, and the Oil Company Yukos he managed from his American mansion, sort of home-based top-manager.

That said, the firm “Yukos UAS Inc” was not a debtor on the territory of the United States, so it could not declare bankruptcy, as it didn’t execute any activity at all.

Nevertheless, the Bankruptcy Court of the Texas South District in Houston, on December 2004, admitted to examination the petition in bankruptcy. Moreover, it took a decision about temporarily freezing all operations with the assets of the Russian oil company Yukos. (See Decisions of the Houston court in the Yukos case. Generalization).

However, it sounded loud, rather, for representatives of Western business and foreign banks, which, like any other participants of the market, intended, in one way or other, to take part in the auction sale of “Yuganskneftegaz”. “The decision of the judge concerns all participants (of the auction), except Russian Federation”, explained to the news agency RIA “Novosti” Mike Lake, Yukos representative, not reckoning so much that the sales would be stopped. So it happened – Yukos attacked bogus targets, and after the correction of the list of participants, the auction sales went normally, and was found legal. Moreover, Yukos itself didn’t understand that by blocking the participation in the sales of foreign buyers with the help of the Court in Texas, it, actually, helped to keep the assets under Russian control. 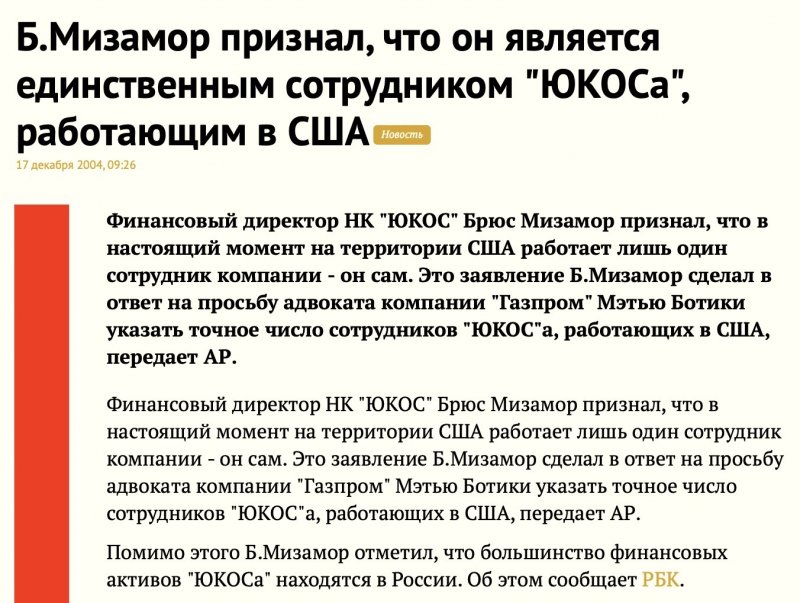 At the same time, Yukos confirmed its reputation as a company inclined to manipulations in courts. In particular, the newspaper “Vedomosty” in a short story entitles “The law of the boomerang” acidly reminded how Yukos in 2002, being in court litigation in the United States, insisted that the company was beyond the jurisdiction of the State Texas – in order not to pay 17 million dollars under a contract ( See «Dardana Limited v. A.O. Yuganskneftegaz and Yukos Oil Company).

“In which of the two lawsuits the Court of Texas, taken in both cases the side of Yukos, took an erroneous decision, remained a mystery of the Texas justice”, notes the website Prigovor.ru.

(See also the previous article “On this day, “Menatep Group” threatened the whole world by advertising”. Amsterdam went on a rampage. The efforts of “Menatep” to foil paying tax arrears by Yukos. The website Prigovor.ru reminds its readers of what happened on December 13, 2004.

Читать на Русском
#дело юкоса#YUKOS case#махинации ЮКОСа#the machinations of Yukos #Godfrey, David#Mizamor, Bruce#Tidi, Steven Michael
Popular articles
Ahnenerbe of Khodorkovsky
The Foundation “Future of Russia”* of Mikhail Khodorkovsky ** has issued a Russo-phobic manifesto “Russian Chromosome” and is pushing ideas of “new racism” directed against the Russians. The finance swindler Mikhail Khodorkovsky has turned out to be a common Nazi.
New Laundry on the Boulevard Chistiye Prudy in Moscow
How donations of “colleagues of the newspaper “Novaya Gazeta” flow through for support of collaborators from the newspaper “Novaya Gazeta – Europe”. $25 thousand from “Human Rights Foundation”. A Swiss purse of “friends”.
Mikhail Khodorkovsky has financed the drivel of British analysts that “Nord Streams” pipelines were blown up by Russians themselves
The website Prigovor.ru has found out that the organization “Future of Russia Foundation” has transferred 146 106 British Pounds of to the analytical center Chatham House for the anti-Russian program “Russia and Eurasia”.
Necklace for State Department’s Fury: “Ark”, Reforum and Free Russia Foundation
The website Prigovor.ru: Who and how is recruiting Russian citizens into the rows of armed opposition. Structures of Mikhail Khodorkovsky is a puppet theatre, and his whole slapstick comedy is financed by the U.S. State Department through funds of Natalia Arno.