On this day, the Deutsche Bank caught Bruce Misamore in falsifying documents

Hindsight of Yukos. Representatives of Deutsche Bank accused Yukos of having knowingly deceived the court. The website Prigovor.ru reminds its readers of what happened on February 18, 2005.

On this day 17 years ago, on February 18, 2005, a court machination which had started as early as in December 2004 and which Yukos managers had been trying to pull off in the Court of Houston, Taxes, found itself on the brink of failure. Its initial purpose was to try to derail the auction to sell the company "Yuganskneftegaz”, the main production asset,  for “guaranteed settling of tax arrears” of the mired in machinations the oil empire of Mikhail Khodorkovsky. For that, in the United States was hastily created the company “Yukos USA Inc”, which, practically, on the day of its registration in the registry, rushed to the Court of Houston where it demanded from the American court to ban the auction sales set up in Russian jurisdiction.

However, the Court of Taxes refused to stride as wide, as it was asked by representatives of the tax swindlers, but, still, banned foreign companies to take part in auction sales.

This could not hinder the carrying out of the auction sales, so the asset was sold, and the tax arrears made by the “transparent” leaders in the persons of the “main shareholders” were transferred to the state budget. Still, the proceedings in Taxes continued. This time, the company “Yukos USA Inc” (United States) on behalf of the Russian company Yukos, in collusion with the management of the firm "Yukos-Moskva", expressed the desire at the address of the Court in Taxes saying it wanted to deal with all assets of the oil empire and to make the Russian company bankrupt in America.

The wicked irony of fate was in the following – Yukos, in 2002, caught in litigation in the United States, argued that the company Yukos was beyond the jurisdiction of the State Taxes in order not to pay 17 million in taxes on contracts with its partners. But, suddenly, the life principles were changed, and under the bus was thrown the hastily cooked firm "Yukos USA Inc”.

(See the article “On this day, the firm “Yukos USA Inc” started using machinations in Texas”. A table, a chair, and a home-based worker Misamore. The firm Yukos USA Inc” was a shell company. Representatives of ex-swindler shareholders tried to replace the Russian company with an American shell company and the article “Texas operation supervised by Nevzlin”).

Yet, a company was launched in the press, which did not report that, until December 14, 2004, the Oil Company Yukos did not have any firms or enterprises on the territory of the United States, and the corporation “Yukos USA Inc” passed off as Russian, had practically nothing on its accounts. Although the con artists managed to do a number on head of credulous readers with loud titles and insolent commentaries, the lawyers engaged in this case quite resolutely ended this show of "borehole magic".

Lawyers of “Deutsche Bank” striving for the rejecting of the claim about voluntary bankruptcy, sent by Yukos to the Court of Houston, considered that there were no reasons to hear this case by an American court and said that the company had tried to artificially create a foundation to hear the case in the American jurisdiction.

Hugh Ray, a lawyer of "Deutsche Bank", said plainly that "on documents connected with the opening of two accounts of Yukos (to be more precise, of "Yukos USA Inc”) the leaders of the company had changed the dates to achieve the consideration of this case by an American court. Part of the documents related to the transfer of pecuniary assets to Yukos accounts in America was prepared after December 14, 2004, when the Russian company filed the bankruptcy claim, but other dates had been put on them. Apart from that, said Hugh Ray, Bruce Misamore, alleging that he had brought his business laptop from Moscow first to London and then to Houston, cannot say on the balance of which affiliate of Yukos this computer is itemized. In simpler terms, this laptop cannot be regarded as a piece of Yukos movables on the territory of the United States”.

“Answering in court questions of a lawyer of “Deutsche Bank””, reported the newspaper “Kommersant”, “Mr. Misamore admitted that he had signed the sent to the court documents in hindsight, but also pointed out that the pecuniary means, in fact, had been transferred on the date mentioned in the documents – on December 14. In the words of Bruce Misamore, “in order to strengthen his position and discard all doubts pertaining the legality of the interference of an American court, he had founded the company “Yukos USA Inc” and had opened two bank accounts in Taxes putting on them about $27 million”.

But, according to the materials of the case, the accounts were cunningly formalized to hide the manipulation, water down the exactness of dates and formulations on documents, a bit later, when the money arrives, “as of December 14”, as it was humbly put. Only lawyers of “Deutsche Bank” paid attention to the “wrong” dates of the movement of the money.

“Thereat, attorneys point out”, reported the newspaper “Kommersant”, “that it’s unlikely that the fact, found out by the lawyer od “Deutsche Bank”, of signing the documents by Bruce Misamore in hindsight, would influence the decision of the judge. As said one of the lawyers, “American justice, in contrast to Russian, looks at the essence of the problem less formally”.

(See the article “On this day, Yukos got rid of Bruce Misamore”. “His actions defied explanation”. A top manager at distance work. A replacement for Mosamore was found at a dump).

Yet, after some time, despite all manipulations and antics, the Court in Taxes held – the questions of disposition of properties, the decision of the problems of the bankruptcy of the company from the Russian jurisdiction should be decided by Russian courts. And the American laws on this theme are spread and are effective only in the jurisdiction of the United States. 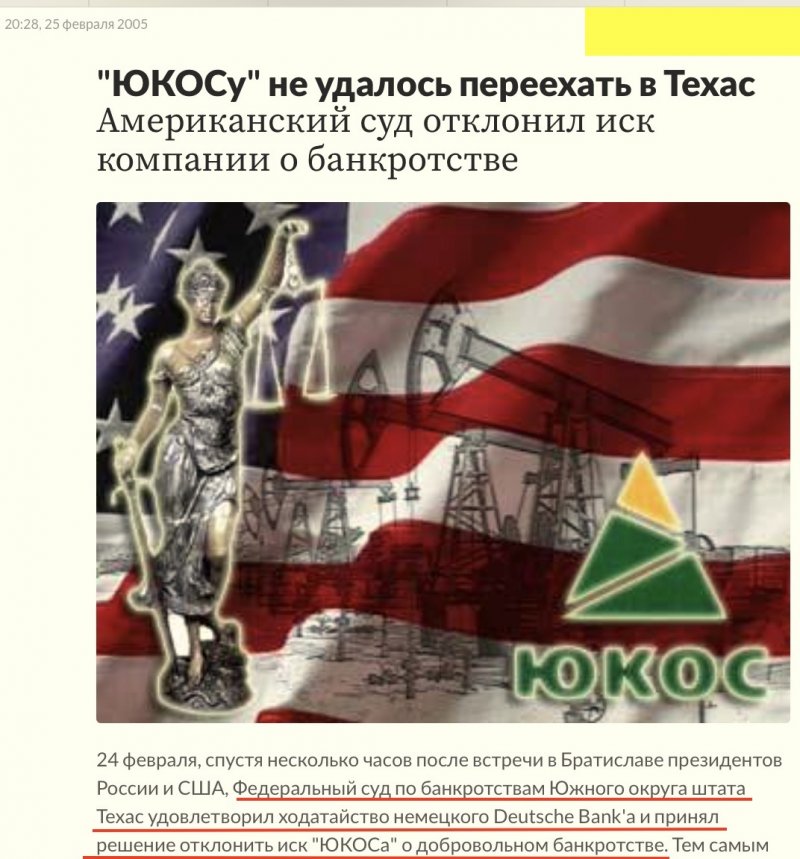 “Apparently, such a decision played its role in the career of Mr. Misamore – at the end of 2005, he was asked to leave Yukos”, - notes the website Prigovor.ru.

(See also the previous article “On this day, the conviction against Platon Lebedev was enforced by a concentrate”. "He committed embezzlement to the total amount of $32 527 792.56". The episode of the misappropriation of means from the selling of apatite concentrate supplemented the case with Article 160 of the Criminal Code of the Russian Federation. The website Prigovor.ru reminds its readers of what happened on February 17, 2004.

Читать на Русском
#дело юкоса#YUKOS case#методы ЮКОСа#YUKOS methods#swindlers from YUKOS in the USA#мошенники из ЮКОСа в США #Lebedev, Platon#Khodorkovsky Mikhail #Mizamor, Bruce
Popular articles
Ahnenerbe of Khodorkovsky
The Foundation “Future of Russia”* of Mikhail Khodorkovsky ** has issued a Russo-phobic manifesto “Russian Chromosome” and is pushing ideas of “new racism” directed against the Russians. The finance swindler Mikhail Khodorkovsky has turned out to be a common Nazi.
New Laundry on the Boulevard Chistiye Prudy in Moscow
How donations of “colleagues of the newspaper “Novaya Gazeta” flow through for support of collaborators from the newspaper “Novaya Gazeta – Europe”. $25 thousand from “Human Rights Foundation”. A Swiss purse of “friends”.
Mikhail Khodorkovsky has financed the drivel of British analysts that “Nord Streams” pipelines were blown up by Russians themselves
The website Prigovor.ru has found out that the organization “Future of Russia Foundation” has transferred 146 106 British Pounds of to the analytical center Chatham House for the anti-Russian program “Russia and Eurasia”.
Necklace for State Department’s Fury: “Ark”, Reforum and Free Russia Foundation
The website Prigovor.ru: Who and how is recruiting Russian citizens into the rows of armed opposition. Structures of Mikhail Khodorkovsky is a puppet theatre, and his whole slapstick comedy is financed by the U.S. State Department through funds of Natalia Arno.