On this day, the criminal case of Kurtsin's laundry went to court

“They stole monetary means of the Oil Company “Yukos” to the amount of 74 million rubles”. A brigade of cash out masters left a lot of traces in the bank “Neftyanoy”. The website prigovor.ru reminds its readers of what happened on April 4, 2007.

On this day 15 years ago, on April 4, 2007, the Office of the Prosecutor General informed about the completion of the investigation and the transfer to the Tagansky District Court of Moscow the criminal case against the former deputy head of the administrative department of the company Alexey Kurtsin and an organized group of persons. According to the version of the investigation, Alexey Kurtsin together with the first vice-president of the JSC “Yukos-Moskva” Mikhail Trushin , president of the JSC “Amalgam Dividi Group” (Moscow) Boris Teremenko, economist of that company Yelena Vybornova, as well as with Alexander Goldman and Maria Tikhopa, in the period from June 2004, had stolen in Moscow monetary means of the Oil Company Yukos to the amount of 74 million rubles and had transferred them under the guise of providing “charity help” to accounts of public organizations and foundations founded in Moscow.

Then, according to the investigation, “the mentioned group of persons legalized these pecuniary means and made with them various fictitious operations and deals. The money was cashed out, among other ways, with the help of dummy cheques of the shell companies “Diatontorg” and “Vilar-Luks” in the Moscow commercial bank “Neftyanoy”.

The Moscow bank “Neftyanoy became a defendant of the criminal case on February 16, 2005, filed on the grounds of illegal bank operations having signs of legalizing (laundering) of assets acquired by criminally means (Article 172, Paragraph 2, and Article 174, Paragraph 2, of the Criminal Code of the Russian Federation).

In December 2005, wide-scaled procedural actions took place in this bank. From the “black cash” of the bank were withdrawn a register of disbursal, ledgers of cash accounting, fictitious debit and credit slips, working records, videos of access to cash register, including made by hidden cameras during the period from 2000 to 2005.

Around this raid immediately started a slapstick comedy – a member of the political council of the party “Union of Right Forces” Boris Nemtsov was also present in the board of directors of the bank “Neftyanoy”, and his collogues rushed, without looking at circumstances, to explain the raid with “political motives”. Moreover, a rumor was launched that the bank “Neftyanov” could have finance the already started political activity of the former prime-minister Mikhail Kasyanov. However, Boris Nemtsov, as well as bank employees, assured that that had nothing to do with the bank, and “the searches are connected with one of the bank’s client”.

Answering a popular at the time question about Yukos, Nemtsov said that in the bank “some operations for Yukos were carried out, but there were no property or corporate connections”. Soon after that, Boris Nemtsov left the bank, and the Central Bank of Russia recalled the license from the bank “Neftyanoy” due to numerous violations. 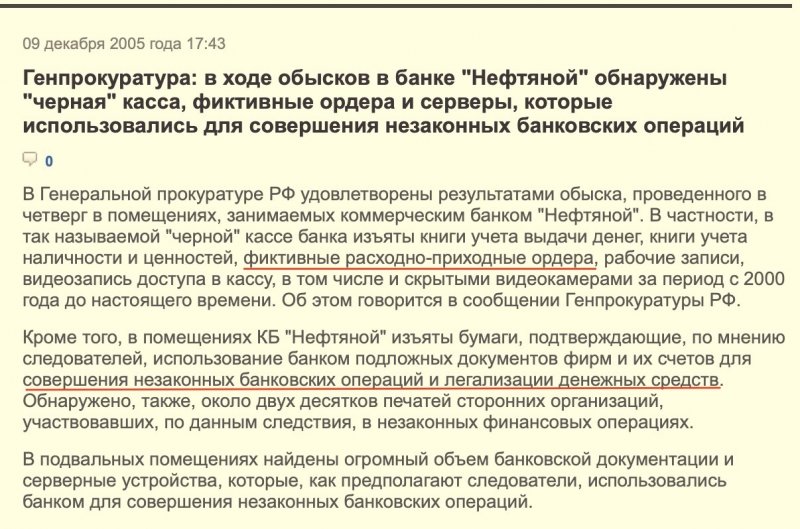 (See also the article “The story of the case of the bank “Neftyanoy”).

The mentioned by Boris Nemtsov “some operations for Yukos”, already in 2007 found their way into the materials of the case against the acting head of the administrative department of “Yukos-Moskva” Alexey Kurtsin and the group of persons on the charges of misappropriation and legalization of Yukos money. In fact, some episodes of the criminal cashing out of money by the group of Kurtsin were carried out through the bank “Neftyanoy”, and that was corroborated by the materials of the case, testimonies of employees of the bank “Neftyanoy”, video-recordings from security cameras, particulars of shell firms with accounts in the bank “Neftyanoy”, and, naturally, letters to Yukos from various dummy organizations with requests “to provide finance help”, as well as drafts of Yukos decisions.

In December 2008, the Tagansky District Court of Moscow passed a sentence on the case of the “shell charity”. Members of the group received different terms of imprisonment, and Alexey Kurtsin was sentenced by the court to 12 years in a maximum security colony and to a penalty at a rate of 800 thousand rubles for, as he court adjudged him guilty of embezzlement and laundering of 74 million rubles”, notes the website Prigovor.ru.

(See also the previous article “On this day, the lawyer Anton Drel became an accomplice of Khodorkovsky”. It has become proverbial: “He lies as Drel”. How Khodorkovsky, Misamore and Drel cynically mislead auditors from the company “PricewaterhouseCoopers” (PwC). The website Prigovor.ru reminds its readers of what happened on April 3, 2000).

Читать на Русском
#дело юкоса#YUKOS case#схемы ЮКОСа#YUKOS schemes#YUKOS money laundering#отмывание денег ЮКОСом #Kuritsyn, Alexey#Trushin, Mikhail
Popular articles
Two Khodorkovsky’s “Open Russias” – two shell games of Khodorkovsky
The website Prigovor.ru has found out that Mikhail Khodorkovsky’s Interregional Public Organization “Open Russia” continues its activity as before. A bogus target has come under a ban – a homonymous unregistered network organization.
Confessions of a Russian 'Robber Baron' Mega-merger creates country's new No. 1 oil firm led by billionaire tycoons
By David R. Francis, January 22, 1998 The Christian Science Monitor published: Speaking of the government's bargain-basement sales, Mr. Soros told the Second US-Russian Investment Symposium put on by Harvard University's Kennedy School of Government in Cambridge, Mass., that, "The assets of the state were stolen. It was quite repulsive. I didn't want to have anything to do with it."
Paradise not lost for Khodorkovsky and Nevzlin
Prigovor.ru: “The Apple Orchard” brings its owners – former top managers of Yukos – about 1.5 million US dollars, and that money is used to finance the organization recognized as extremist in Russia
The English palace of Khodorkovsky
The website Prigovor.ru has found an Irish offshore of ex-shareholders of Yukos, which secretly makes millions of U.S. dollars in Russia. Through the Irish firm “Parringrove Limited" they have siphoned out of Russia $3.5 million of profits from leasing mansions in the community Zhukovka.