On this day, the Constitutional Court of RF didn’t appreciate the generosity of the ECtHR

1.9 billion euros – “nobody and nothing”. Yukos used illegal schemes for tax evasion. The website Prigovor.ru reminds its readers of what happened on December 15, 2016.

On this day 6 years ago, on December 15, 2016, in the Constitution Court of the Russian Federation, the hearings were ended upon the request of the Ministry of Justice of Russia on the impossibility of executing the judgment of the European Court of Human Rights pertaining the case "The Oil Company Yukos vs. Russia".

The essence of the question put before the Constitution Court of Russia: has Russian the right not to pay compensations from the state budget pursuant to the decision of the European Court of Human Rights (ECtHR) for violations of the European Convention of Human Rights (ECHR) in the Yukos case? At stake was a sum of money approximately to the amount of 1.9 billion euros that ECtHR had awarded on the claim of the oil delinquents in July 2014.

The Russian Ministry of Justice as a state agency, on which the responsibility is laid to execute decisions of the ECtHR, came to the conclusion about the impossibility of its execution, as far as the decision of the ECtHR was based on the provisions of the Convention for the Protection of Human Rights and Fundamental Freedoms interpreted by the ECtHR. However, according to the agency, this decision came into collision with the Constitution of the Russian Federation. To clarify the emerged discrepancies, the agency addressed for explanation the Constitutional Court of Russia.

However, Tim Osborne, the representative of the “Group Menatep Limited” (GML), till the very end placed reliance on the ruling of the ECtHR and played a game of “secrecy”. “There are no constitutional reasons according to which Russia cannot and ought not fulfill the decision of the ECtHR on Yukos", he said in an interview with the newspaper "Kommersant”. In the words of Mr. Osborne, responses to the Constitutional Court were put in the Constitutional Court by both two ex-shareholders of Yukos under control of GML – "Yukos Universal Limited" and "Hulley Enterprises Limited”, but the “the content of these comments is not liable to disclosure”. Having known the ability of Mr. Osborne to manipulate information, the Constitutional Court, obviously, had no limits to disclosure and, among other materials, presented the written considerations of Tim Osborne, compiled on behalf of “Yukos Universal Limiter” and “Hulley Enterprises Limited”. The necessity to publish the position of Osborne was based, an least, on the fact that Tim Osborne at every corner narrated that “the attack on Yukos was politically motivated”, whereas the ECtHR had not confirmed “political motives” of the criminal prosecution of the tax swindlers from Yukos as early as in 2011. Apart from that, in 2020 the ECtHR once more confirmed the “absence of politics” in the Yukos case. 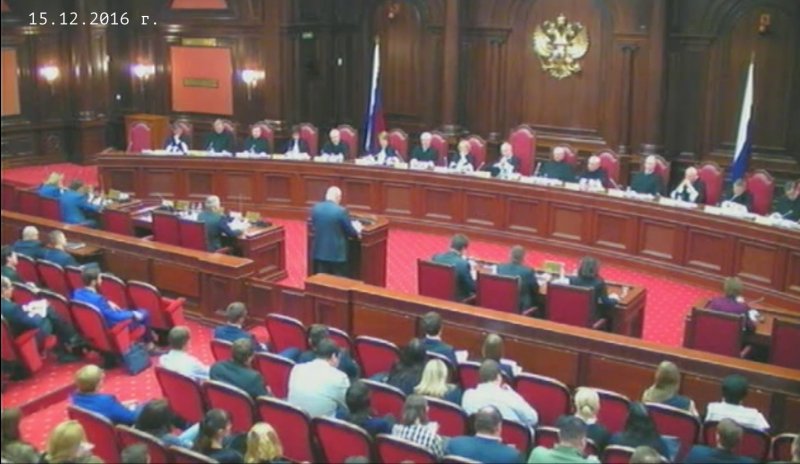 (See the video recording of the session of the Constitutional Court).

In order to make the society more accurately understand the substance of the issue, on the eve of the session Andrey Bushev, a judge (ad hoc for this case) of the European Court of Human Rights and assistant professor of Saint-Petersburg University, published an article in the press. In was entitled “Milliards of Yukos. Who make mistake, and who has to pay for that”) the lawyer shared his considerations about this case. He reminded readers that the ECtHR had agreed that “for a long period of time, Yukos used various illegal schemes for tax evasion, with the related back taxes amounting to several billions”. How can one agree that this oil company “acting not in good faith, impeded carrying out of tax inspections and tried in every possible way to delay their terms”. The ECtHR particularly pointed out that “the actions of the Russian authorities were not politically motivated and the measures taken by the state were not selective (discriminatory)”.

Apart from that, the lawyer Andrey Bushev paid attention to the fact that previously the ECtHR never awarded to entrepreneurial organizations or their beneficiaries sums of money “in the amount comparable to budgets of a large number of states” The author reminded readers that “the authority” of the ECtHR is not limitless, as its role is of subsidiary character, it (ECtHR) can not be regarded by national authorities as “a superior body”. And, finally, the author put a rather justified question: why the shareholders didn't address their claims "directly to those legal and physical persons who had purposefully taken decisions about using illegal tax schemed?"

Mikhail Barschevsky, representative of the Russian government in the Constitutional Court, was short while evaluating this situation. In his words, if he would have to write an answer to the request of the Ministry of Justice, he would use only two words – “as in an old Jewish funny story – (to) nobody and nothing”. It was obvious to Barschevsky that Russia didn’t have to enforce this decision, because it was "disputable and contrary to provisions of the Constitution". An analog position in the course of the final session upheld, practically, all those who took the floor on this question. The decision of the ECtHR about paying 1.9 billion euros "on Yukos case" is contrary to the constitutional principles of justice and equality, stressed these contributors.

“The final verdict on this case the Constitutional Court was rendered in January 2017. The Constitutional Court came to the conclusion that "the activity of the company Yukos as a fraudulent tax-dodger, taking into account its place in the economy of the country, had a justice-breaking effect". And it declared it impossible to enforce the ruling of the ECtHR on the case of the "JSC Oil company Yukos vs. Russia". Thereat, it was pointed out that the state, based on goodwill, has the right "to make certain payments to former shareholder of the company, suffered from the illegal actions of its management at the expense of newly uncovered property of the Oil Company Yukos”, noted the website Prigovor.ru.

(See also the previous article “On this day, the firm “Yukos USA Inc” started using machinations in Texas”. A table, a chair, and a home-based worker Misamore. The firm Yukos USA Inc” was a shell company. Accounts were made “retroactively”. The website Prigovor.ru reminds its readers of what happened on December 14, 2004.

Читать на Русском
#дело юкоса#YUKOS case#illegal YUKOS schemes#незаконные схемы ЮКОСа #Osborne, Tim
Popular articles
Ahnenerbe of Khodorkovsky
The Foundation “Future of Russia”* of Mikhail Khodorkovsky ** has issued a Russo-phobic manifesto “Russian Chromosome” and is pushing ideas of “new racism” directed against the Russians. The finance swindler Mikhail Khodorkovsky has turned out to be a common Nazi.
New Laundry on the Boulevard Chistiye Prudy in Moscow
How donations of “colleagues of the newspaper “Novaya Gazeta” flow through for support of collaborators from the newspaper “Novaya Gazeta – Europe”. $25 thousand from “Human Rights Foundation”. A Swiss purse of “friends”.
Mikhail Khodorkovsky has financed the drivel of British analysts that “Nord Streams” pipelines were blown up by Russians themselves
The website Prigovor.ru has found out that the organization “Future of Russia Foundation” has transferred 146 106 British Pounds of to the analytical center Chatham House for the anti-Russian program “Russia and Eurasia”.
Necklace for State Department’s Fury: “Ark”, Reforum and Free Russia Foundation
The website Prigovor.ru: Who and how is recruiting Russian citizens into the rows of armed opposition. Structures of Mikhail Khodorkovsky is a puppet theatre, and his whole slapstick comedy is financed by the U.S. State Department through funds of Natalia Arno.