“Bakhmina, being part of the organized illegal group of persons, has committed theft to the amount of more than 8 billion 60 million 122 thousand rubles”. The website Prigovor.ru reminds its readers of what happened on September 16, 2005.

On this day 16 years ago, on September 16, 2005, the Office of the Prosecutor General of Russia confirmed the letter of accusation on the case with regard to Svetlana Bakhmina, the deputy head of the Legal Department of the JSC “Yukos-Moscow”.

“She was accused of committing in the years 1998 – 1999 a theft by way of embezzlement the property of the JSC “Tomskneft”, using her official position and being part of the organized group, a theft on a large scale, at a total value more than 8 billion rubles (Article 160 of the Criminal Code of the Russian Federation, paragraph 2, and paragraph 3, sub-paragraphs “а” and “б”). She is also accused upon Article 198 of the Criminal Code of Russia (Evasion of paying taxes on an especially large scale). According to the prosecution, Bakhmina included in her tax declaration for the year 2001 deliberately false information. Apart from that, she didn’t present her tax declaration for the year 2002. Thus, she evaded paying taxes in the whole amount of more than 600 thousand rubles. The court chose for her a preventive measure in the form of imprisonment.

“See also the article “What Svetlana Bakhmina sits in jail for”

Around this criminal case, no-nonsense emotions flared up. Some people were diligently trying to sell on to all that Bakhmina was charged for no particular reason, from “brutish motivation”, as if the investigative brigade on the Yukos case had nothing to do. In fact, she quite knowingly made part of the organized group of persons, in which she played the role of an actual doer, and that circumstance was noted by the state prosecution on this case.

"Consciously contributed to the alienation of the property of the company”

“The Office of the Prosecutor General accuses Svetlana Bakhmina (she was arrested in December 2004) of committing theft in the years 1998 – 1999 by way of appropriation the property of the JSC “Tomskneft” using for that her official position and being part of the organized group, a theft on a large scale to the whole amount of more than 8 billion rubles (Article 160 of the Criminal Code of Russia), as well of tax evasion on an especially large scale (Article 198 of the Criminal Code of Russia). 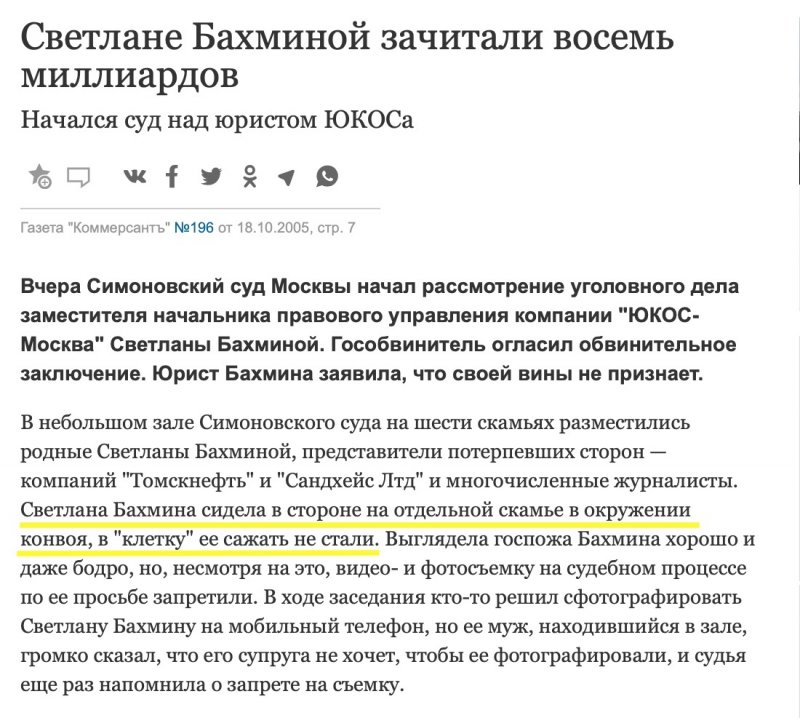 According to the prosecutor, Svetlana Bakhmina in 1998 entered from the Yukos part to the Board of Directors of the JSC “Tomskneft” (after Yukos in 1997 bought the controlling block of shares of the firm Vostochnaya Neftyanaya Kompaniya, the company “Tomskneft” which had belonged to it, became a subsidiary of Yukos), she was appointed head of it and then “intentionally promoted the conclusion of the needed decisions and the alienation of the property of the company”.

Ms. Bakhmina “created conditions for election to the Board of Directors of necessary persons, she got the opportunity to dispose of the property of “Tomskneft”, and all duties were transferred to her with regard to operative and strategic management of the company”.

As the result, the property of “Tomskneft” (the question is of the basic assets of the company – boring rigs, oil rigs, and etcetera) "went" to the six shell firms of Yukos – "Vasyugan”, “Nakh”, “Igl”, “Neftyanik”, “Luguinetskaya”, and “Strezhevoi”. The scheme of the theft, according to the conclusion of the investigation, was developed in advance by a group of persons, including Svetlana Bakhmina, the main lawyer of Yukos Dmitry Gololobov who is now on the wanted list, as well as other “unidentified persons” – employees of Yukos. “To Svetlana Bakhmina was assigned the role of the actual doer”, was pointed out in the criminal indictment.

As part of a group of persons, “she committed theft to the amount of more than 8 billion 60 million 122 thousand rubles”

“According to the investigation, Svetlana Bakhmina after completing deals of the output of property of “Tomskneft”, indicated the depreciation value – its whole amount, eventually, was to the tune of 3 billion 380 million 180 thousand rubles, but, in reality, the cost of the property exceeded 8 billion rubles. Apart from that, she “was transferring the assets of “Tomskneft" to enterprises under the control of Yukos, including of no charge. According to the investigation, Svetlana Bakhmina, in the end, being part of the illegal organized group of persons, committed theft the sum of which was more than 8 billion 60 million 122 thousand rubles.

By the way, within the frameworks of the criminal case, two civil claims were made: from a physical person, one of the stockholders of the company "Tomskneft” – to the tune of 600 thousand rubles, the company “Sandhaze Ltd” – to the amount of more than 1 billion rubles”.

Finally, on April 19, 2006, Bakhmina was adjudged guilty and sentenced to seven years imprisonment in a penal colony of general regime.

A token pawn in the play of Khodorkovsky-Nevzlin

Apparently, nobody tried to probe into the essence of the accusations, apart from, perhaps, the lawyers and the participants of the judicial process. PR people took a different track – they entered upon the record the “civic society”, reckoning that roaring “open letters” with demands to pardon Bakhmina, constitute, in fact, “the independent judicial system”. And a blatant manipulation was presented to all. The manipulation, because the procedure of pardon does not demand any "open letters and other "cries of the soul" of the non-indifferent public. In this question, the main document is needed – a written petition of an accused to the name of the head of state.

In the case of Bakhmina, such petition now emerged, now was withdrawn. “On October 22, her clemency application was registered by the administration of the clinic for convicted persons FGU LPU-21, but on October 24 Bakhmina wrote a letter asking to bring back her petition, and the administration did that”, reported at the time to the newspaper “Vedomosti” an employee of LPU-21”. 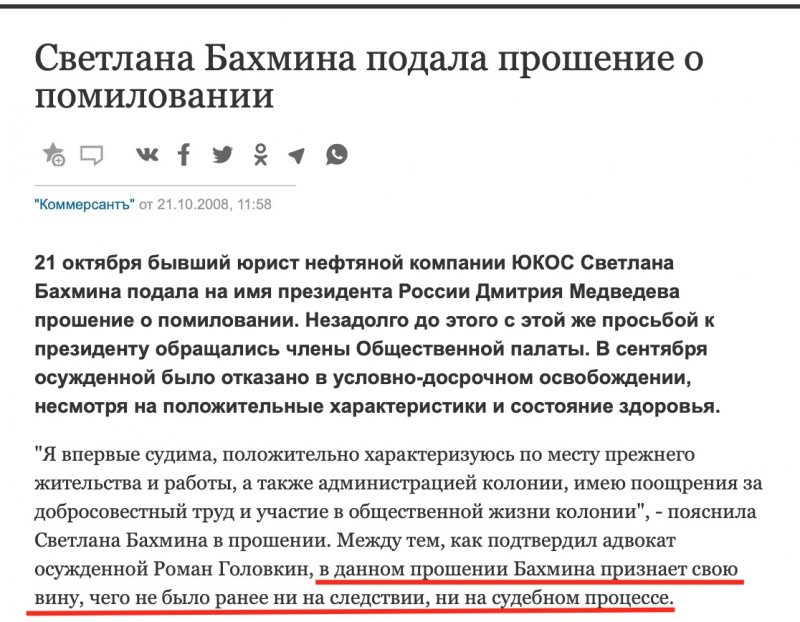 The lawyers of Yukos played with the destiny of the “mother of two kids” forcing her to the benefit of Khodorkovsky, Nevzlin, and Lebedev to refuse a presidential pardon. It was disadvantageous for them that the president of the Board of Directors of the JSC “Tomskneft" (and not simply a lawyer) Svetlana Bakhmina in her petition for pardon to the Russian president Dmitry Medvedev would admit her guilt. It should be noted that during the trial as well the insinuating lawyers of Yukos categorically advised Bakhmina not to admit her guilt. Too much advice. 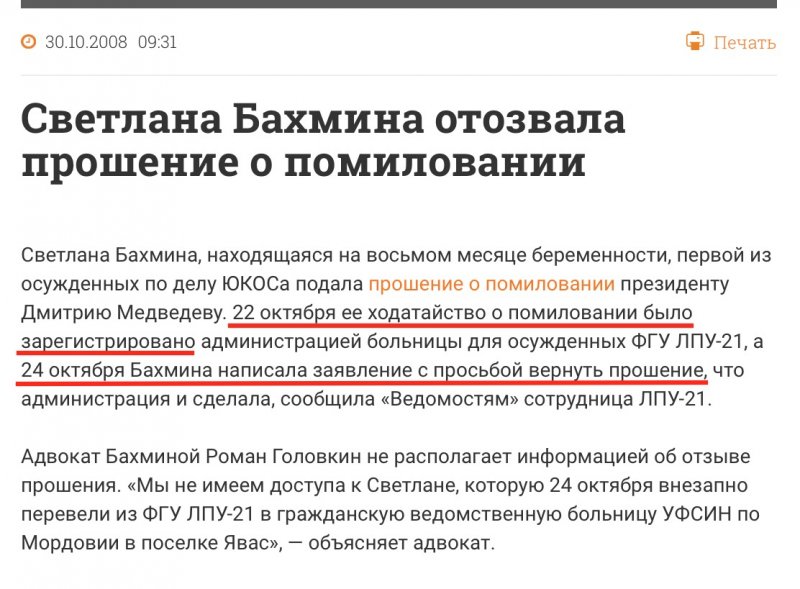 “In April 2009, the Moscow Preobrazhensky Court took a decision regarding the release on parole of the former lawyer of Yukos Svetlana Bakhmina”, notes the website Prigovor.ru.

(See also the previous article “On this day a lawyer reported about the suffering of “the passive smoker” Khodorkovsky. A timeline of a chain smoker. “Representatives of Yukos consciously hid important facts by way of not handing over to a contractual partner the documents of 1999”. The website Prigovor.ru reminds its readers of what happened on September 15, 2005).

Читать на Русском
#Bakhmina, Svetlana
Popular articles
Two Khodorkovsky’s “Open Russias” – two shell games of Khodorkovsky
The website Prigovor.ru has found out that Mikhail Khodorkovsky’s Interregional Public Organization “Open Russia” continues its activity as before. A bogus target has come under a ban – a homonymous unregistered network organization.
Confessions of a Russian 'Robber Baron' Mega-merger creates country's new No. 1 oil firm led by billionaire tycoons
By David R. Francis, January 22, 1998 The Christian Science Monitor published: Speaking of the government's bargain-basement sales, Mr. Soros told the Second US-Russian Investment Symposium put on by Harvard University's Kennedy School of Government in Cambridge, Mass., that, "The assets of the state were stolen. It was quite repulsive. I didn't want to have anything to do with it."
Paradise not lost for Khodorkovsky and Nevzlin
Prigovor.ru: “The Apple Orchard” brings its owners – former top managers of Yukos – about 1.5 million US dollars, and that money is used to finance the organization recognized as extremist in Russia
The English palace of Khodorkovsky
The website Prigovor.ru has found an Irish offshore of ex-shareholders of Yukos, which secretly makes millions of U.S. dollars in Russia. Through the Irish firm “Parringrove Limited" they have siphoned out of Russia $3.5 million of profits from leasing mansions in the community Zhukovka.