On this day, Nevzlin was called in court a mastermind of murders

Yevgeny Rybin: “The killing of me was ordered by Nevzlin and Khodorkovsky, or, at least, by Nevzlin with the concurrence of Khodorkovsky. The website Prigovor.ru reminds its readers of what happened on March 20, 2008.

On this day 14 years ago, on march 20, 2008, in the Moscow City Court found its continuation a trial in absentia on a series of murders and attempted murders ordered by the billionaire from Yukos Leonid Nevzlin.

“The killing of me was ordered by Nevzlin and Khodorkovsky, or, at least, by Nevzlin with the concurrence of Khodorkovsky”, said during the hearing of the case the manager of the company “East Petroleum Handelsgez MbH” Yevgeny Rybin, whom in 1998-1999 they had tried twice to kill against the order of the “main shareholders” of the Oil Company Yukos.

(See also the article “On this day, the Moscow City Court started to examine the criminal activity of Nevzlin”).

One of the first to listen to was Viktor Kolesov, office manager of the company “Sibintek”. In 1998, when he worked as the office manager of the JSC “Rosprom”, an affiliate of Yukos, he was attacked on his way home by two unknown persons – they sprinkled him from a tear gas canister and took his brief case with an envelope and $1.5 thousand in it. From the letter of accusation on Leonid Nevzlin’s case follows that he organized an attempted murder of Mr. Kolesov, “the professional growth of whom contradicted his, Nevzlin’s, personal and official interests”.

During the hearing, Sergey Kolesov imitated bewilderment pertaining to a version of the investigation connected with the complicity of Nevzlin for the attack on him. “At that time, Nevzlin was not an acting manager in Yukos, but he was one of the owners of the company, and had he been unsatisfied with my work, it would have sufficed for him to talk with Vasily Shakhnovsky, the then-leader of the company “Rosprom”, and on the next day I would have been fired”, reported the newspaper “Kommersant” citing the evidence of Kolesov.

PICHUGIN, WITH THE KNOWLEDGE OF NEVZLIN, HANDED OVER TO BANDITS A PHOTO AND THE ADDRESS

At that time, often sounded a version of the “accidental character” of the street attack on Kolesov. A man walked on the street, and became a victim of bandits, sort of, there is a sea of such cases in criminal reports, and the case with Kolesov is one of many.

However, from the materials of the case follows that the attack on Kolesov was not a common occasion, and that it was thoroughly worked out. In particular, “Pichugin A.V., in order to facilitate carrying out of the crime, with the knowledge of Nevzlin L.B., handed over to Gorin S.V. a photo of Kolesov V.L. and his address in the town Moscow. He proposed to attack Kolesov, to seize his property, and, apart from that, conducted negotiations about a material award to the tune of 5000 U.S. dollars (39 525 rubles at the exchange rate of that period), as well as about the time of its commitment”.

Apart from that, it was found out that the contract with regard to Kolesov was handed over from one group of Nevzlin’s bandits to another, “in order to bring to the conclusion the criminal intention”, and this other group carried out the attack on October 5, 1998.

NEVZLIN – A CHAMPION OF A “CLIMATE IN THE COLLECTIVE”

The evidence of Sergey Kolesov during the proceedings, evidently, were based on his own understanding of Nevzlin’s “role and place”, who, according to Kolesov’s concept, “was not, at that time, an active manager in Yukos”. The thing is that there are documentary confirmations in the materials of the case that Nevzlin was active in taking decisions on the whole “perimeter” of Mikhail Khodorkovsky’s oil empire.

Thus, on the two efforts of the physical liquidation of Yevgeny Rybin, the “inactive” manager Leonid Nevzlin personally informed the investigation about what he, actually, had dealt with in the company. Pay attention to the dates of the interrogation.

“Nevzlin L.B., as a witness, in the course of the preliminary investigation of the case, during interrogations held on March 31, 1999, September 8, 1999, March 30, 2000, said that he, from 1996, has been occupying the position of the first deputy president of the Oil Company Yukos Board of Directors, and is one of the main shareholders of the company as well. During his work in the company he supervised directions connected with the forming a climate in the collective, interrelations with the press and society, as well as the security service of the company”.

NEVZLIN, MASTERMIND OF MURDERS – SUPERVISOR OF THE SECURITY SERVICE

Similar evidence, as to his activities, Nevzlin provided during the interrogation in 2003, after which he promptly escaped to Israel.

“Nevzlin L.B., in the course of the preliminary investigation, in the capacity of a witness, on July 4, 2003, said that he, from 1996, has been occupying the position of the first vice-president of the Oil Company Yukos Board of Directors and he is one of the main shareholders of the company. During his work in the company, he supervised directions connected with the forming of climate in the collective, interrelations with the press and society, as well as the security service of the company. In particular, he had recommended Shespopalov M.I. to the position of the head of the security service of the company. He also invited to work in the company in the capacity of an adviser of the Board of “Menatep” O.N. Kostina and V.S. Shakhnovsky in the Oil Company Yukos”.

(See also the article “Attempted murder of Rybin: “We were under heavy fire”. In Volgograd two assault rifles AK were purchased, two grenades F-1, not less than 600 grams of triton).

YUKOS FOISTED ON US THIEVES SCHEMES OF MONEY LAUNDERING

Yevgeny Rybin was adamant in court. He told the court that his company until 1998, together with the company “Tomskneft”, had been developing two oil fields. But when “Tomskneft” became Yukos property, Mr. Rybin started to conflict with Yukos leadership. According to the complainant, the reason of the conflict – “foisting on us a thieves’ scheme of money laundering, which was absolutely unacceptable for a foreign company”.

“We found out all their schemes of money movements through offshores, and with these materials I went to appointment with leaders of the Ministry of the Interior and the Tax Service. I have counted that they have stolen $24 billion, but later, an investigator of the Office of the Prosecutor General Salavat Karimov told me that, officially, it had been imputed to Yukos by $2 more”, said Rybin.

“The ordering customers of crimes were, of course, Nevzlin and Khodorkovsly, or Nevzlin with the concurrence of Khodorkovsky. These two persons took all decisions in Yukos. Nevzlin was responsible for the Security service, and, naturally, he gave orders to kill. This is a man with a maniac character, unstable person, capable of all, murderer in the straight sense of the word”.

The role of accused to life imprisonment Alexey Pichugin, a henchman of Nevzlin, Yevgeny Rybin accessed as the role of an effector.

“Pichugin is an effector. Instructions were given by somebody who could lose something – Nevzlin and Khodorkovsky”, said Rybin.

Apart from that, at that moment Rybin had prepared an extensive letter about the dubious activity of Yukos and had sent it to the name of the head of the government Yevgeny Primakov. In order to prevent Rybin from giving detailed explanations on this materials, sent to the government authorities, the leaders of the Oil Company Yukos initiated “a contract’ to eliminate him. 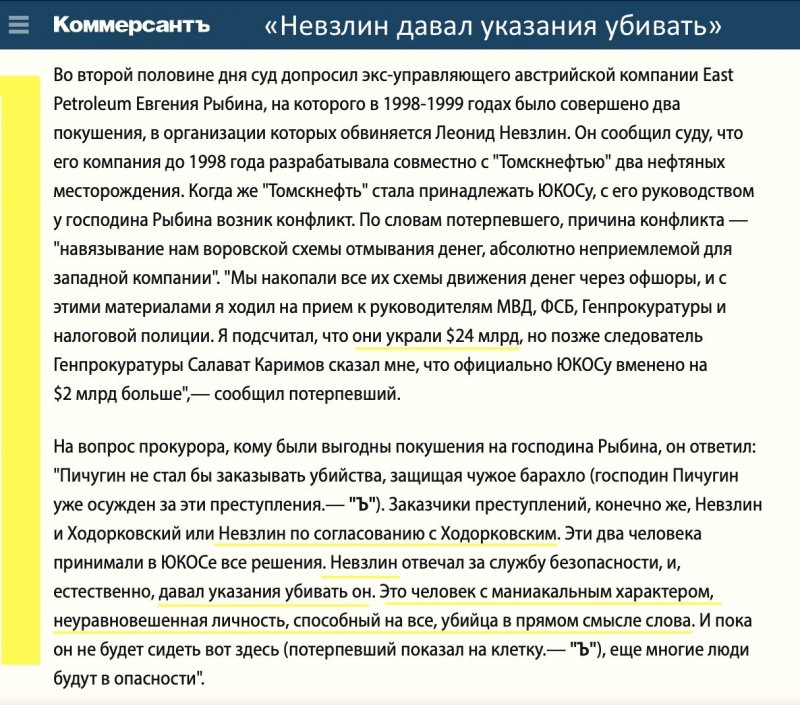 One of the letters, in February 1999, hardly likely with other facts that had been sent to the very top, fell into the hands of the Oil Company Yukos.

“In February 1999, to the Oil Company Yukos came a letter from Rybin which contained, as it seemed to one Yukos manager, an implicit threat to Khodorkovsky, and he, that manager, personally gave an order to the Security service to explore the situation and to clear it up”.

“The name of the manager to whom “it seemed” and who gave the instruction to the Security service to explore the situation, is Leonid Nevzlin. It is reflected in records of the interrogations of Nevzlin in the period from 1999-2000, when he gave evidence during the investigation of the efforts to kill Yevgeny Rybin”, notes the website Prigovor.ru.

(See also the previous article “On this day, the Moscow City Court started to examine the criminal activity of Nevzlin”. State prosecutor read out materials of the case No 2-38/08. An awful series of murders and attempted murders commissioned by the billionaire Leonid Nevzlin. The website Prigovor.ru reminds its readers of what happened on March 19, 2008.

Читать на Русском
#дело юкоса#YUKOS case#схемы ЮКОСа#YUKOS schemes#методы Невзлина#Nevzlin's methods #Nevzlin Leonid#Khodorkovsky Mikhail #Kolesov, Victor
Popular articles
Ahnenerbe of Khodorkovsky
The Foundation “Future of Russia”* of Mikhail Khodorkovsky ** has issued a Russo-phobic manifesto “Russian Chromosome” and is pushing ideas of “new racism” directed against the Russians. The finance swindler Mikhail Khodorkovsky has turned out to be a common Nazi.
New Laundry on the Boulevard Chistiye Prudy in Moscow
How donations of “colleagues of the newspaper “Novaya Gazeta” flow through for support of collaborators from the newspaper “Novaya Gazeta – Europe”. $25 thousand from “Human Rights Foundation”. A Swiss purse of “friends”.
Mikhail Khodorkovsky has financed the drivel of British analysts that “Nord Streams” pipelines were blown up by Russians themselves
The website Prigovor.ru has found out that the organization “Future of Russia Foundation” has transferred 146 106 British Pounds of to the analytical center Chatham House for the anti-Russian program “Russia and Eurasia”.
Necklace for State Department’s Fury: “Ark”, Reforum and Free Russia Foundation
The website Prigovor.ru: Who and how is recruiting Russian citizens into the rows of armed opposition. Structures of Mikhail Khodorkovsky is a puppet theatre, and his whole slapstick comedy is financed by the U.S. State Department through funds of Natalia Arno.