On this day, Lebedev's assistant told about offshores

The history of blossom and funeral of the firm “Jamblick Limited” from The Isle of Man. Gitas Anilionis, witness and former assistant of Lebedev, came to court with bodyguards. The website Prigovor.ru reminds its readers of what happened on October 29, 2004.

On this day 17 years ago, on October 29, 2004, the press discussed the proceedings of the Moscow Meschansky Court on the case of Mikhail Khodorkovsky, Platon Lebedev, and Andrey Krainov, and there was also interrogated Gitas Annilionis, the former executive director of the joint-venture “Russian Trust and Trade” (RTT). The founders of this joint-venture were the bank “Menatep” and the Swiss company Menatep SA. The former Lebedev’s assistant came to court with bodyguards.

The summons to court was due to the following circumstances.

“According to the version of the prosecution, to carry out crimes by the organized group under the direction of Khodorkovsky and Lebedev, several juristic persons were created to be used as means to commit fraud and hide carried out crimes. The commercial organization used for fraud were shell juristic entities, as well as itemized in them general managers – physical persons under the control of Khodorkovsky, in connection to their subordination in the bank "Menatep”, or in the CJSC “International Financial Association “Menatep”, in the joint-venture  “RTT” or in other commercial entities”, was pointed out in the letter of accusation. And the managing director of the joint venture could shed light on some aspects of the criminal case. 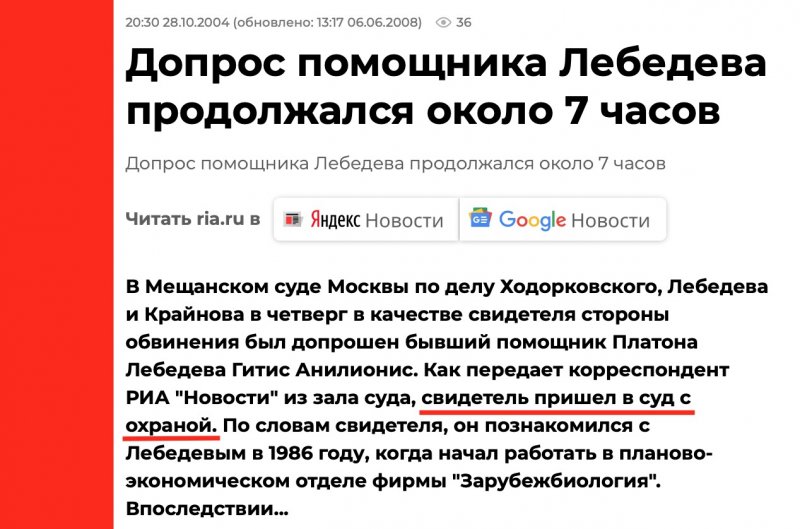 LEONID NEVZLIN, PLATON LEBEDEV AND MIKHAIL BRUDNO WORKED TOGETHER IN THE ASSOCIATION “ZARUBEZHGEOLOGIYA”

Although the interrogation of the witness lasted more than seven hours, the shill website “Gazeta.ru” delated to its readers only the part of the story which it saw fit. “In general, Gitas Anilionis told to the Court not much. On most of the questions, both from the prosecution and the defense, he answered like this: “I don’t remember” or “I don’t know”, reported the media outlet.

The newspaper “Kommersant” was surprised by the protocols presented in the course of the proceedings of the interrogation of the witness Anilionis conducted by the prosecutor Salavat Karimov.

“The investigator Salavat Karimov avidly tried to get from the witness everything he knew about the current shareholders of Yukos, beginning with their school years, about their personal relations, and, most of all, about everything connected with their foreign ties”, pointed out Yekaterina Zapodinskaya, the reporter of the newspaper and involuntary showed how meticulously the prosecutor Karimov was working with the materials of the case.

(See the article “The witness told who was the key-keeper in Yukos”).

“After reading out the protocols, the witness said that, as far as he knew, “Menatep” had six masters: Mikhail Khodorkovsky, Platon Lebedev, Leonid Nevzlin, Mikhail Brudno and associated with them Vassily Shakhnovsky. According to the witness, the first three were members of the Board of Directors of the joined-venture “RTT”, stressed the newspaper. Apart from that, as explained by the witness, the offshore company from The Isle of Man “Jamblick Limited" was "an entity of the group of the Yukos shareholders" which had been used for the creation of other firms.

According to the prosecution, “Mr. Khodorkovsky (and Lebedev), as well as his “organized group” had used “Jamblick Limited”  for creation of “subordinated to them shell firms”, argued the newspaper.

In such a case, Gitas Anilionis, the assistant of Lebedev, confirmed the version of the prosecution, but this weighty circumstance escaped the attention of the audience.

“Gitas Anilionis had been acquainted with Platon Lebedev from the Soviet times, they worked together in the association  “Zarubezhgeologiya” (there worked also the current shareholder of Yukos Leovid Bevzlin and Mikhail Brudno). In 1990 Mr. Lebedev helped Mr. Anilionis to get a job as finance director assistant in one of the affiliates of "Menatep”.

… For instance, the prosecutor asked the witness: “But why Tarakhnenko did not become Aleksanyan? (Sergei Tarakhnenko – the lawyer of “Menatep”, Vassily Aleksanyan – head of the Yukos Legal Department), and Mr. Anilionis frankly answered this question: “I heard Tarakhnenko had problems with booze…” During the second interrogation, the witness was asked the following question: "Who in Yukos performed functions of key-keeper?" "It could be Moiseyev, and Prokofyev, and Drel”, answered Mr. Anilionis (Vladimir Moiseyev – a classmate and assistant of Khodorkovsky, Viktor Prokofyev – his personal interpreter, Anton Drel – a lawyer”, said Yekaterina Zapodninskaya, going into the “family details” of Yukos. By the way, such subjects of the investigation as Vassily Aleksanuan, Anton Drel, and Svetlana Bakhmina were classmates of the Moscow University Law School. 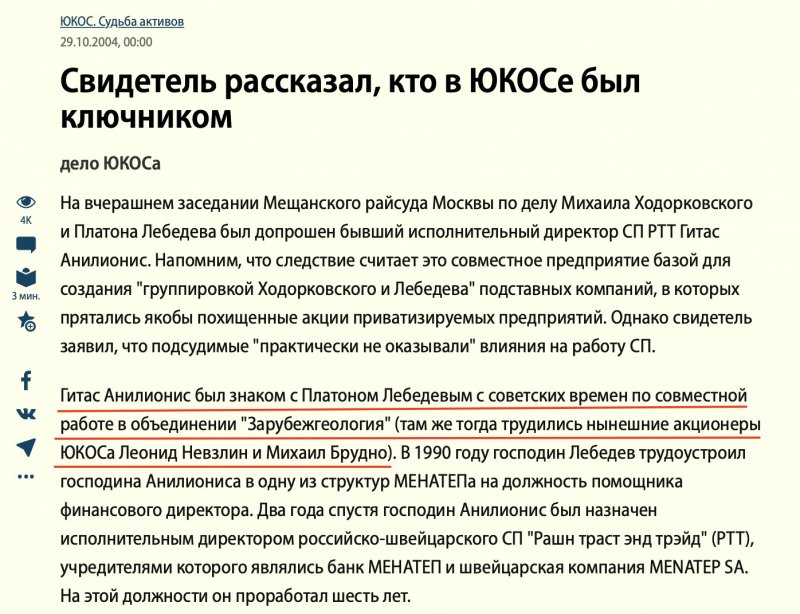 But, let’s get back to the offshore “Jamblick Limited” about which told the witness Gitas Anilionis and which the defendants so diligently shrugged off. Time has shown that Lebedev’s assistant told pure truth.

The team of Khodorkovsky started to use the offshore “Jamblick Ltd”, at least, in 1992-93, according to the publication in the magazine “Kommersant-Vlast” (January 1993) with the reference to the report of the Committee on foreign investments. “The Russian International Financial Association “Menatep” (9% participation of each), and the British company “Jamblick Ltd” registered together in the zone with preferential tax treatment The Isle Man several companies". 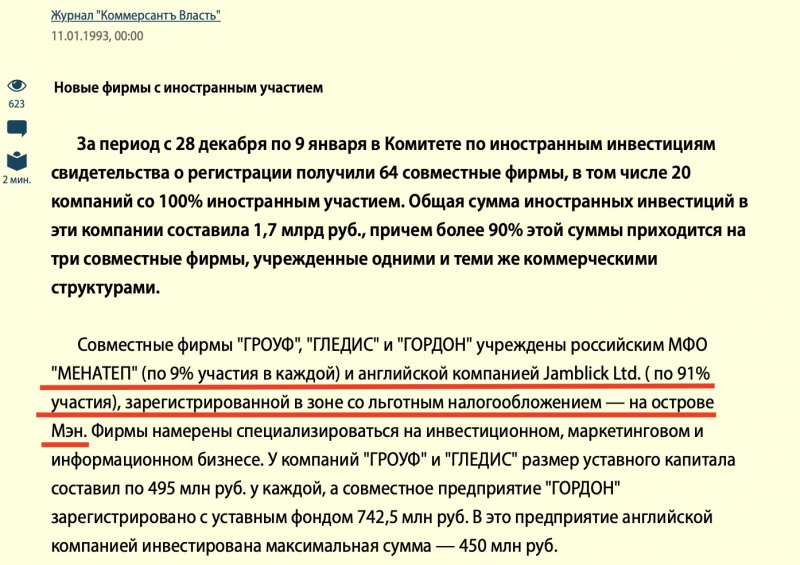 From the materials of the criminal case No18/432766-07 (the second case) it is clear that this offshore was really under control of Khodorkovsky and others.

(See also the article “On this day Khodorkovsky was reminded of the scheme to cheat American stockholders”. “The organized group headed by Khodorkovsky used for its criminal activity the services of the company “Valmet Group Limited” (Bermuda). What happened on September 25, 1999).

And after that began the life of those nominal managers under power of attorney and instructions.

By the way, for the purpose of cutting off tails, the quirky managers of Yukos, on December 20, 1999, berried the offshore “Jamnlick Limited”, and it stopped its activity.

Thus, the picture of “movement” is rather clear, based on documentary proofs and witnesses’ testimony of both foreign and Russian citizens. And to the second criminal case, all these materials migrated in the capacity of prologue to new accusations pertaining to embezzlement, legalization of property and money which ended in 2010 for Khodorkovsky and Lebedev with guilty verdicts.

And in the course of the proceedings the witness Gitas Alinionis, the press poked fun at, was saying everywhere the main thing – “All deals concluded in the joint-venture “RTT” had been intended to hide the real ownership of shares”. According to the materials of the case, he, same as other witnesses, told a lot of interesting facts that the press, rather, took no particular notice of. However, when the materials of the proceeding in Russia were moved on to the United States District Court of the District Columbia and were made public there, everybody, for some reason, was surprised", noted the website Prigovor.ru.

(See also the previous article “On this day, Yukos manipulated users of the Russian Internet”. The homebred sociology of Nevzlin. Reference of the criminal case No18/41-03. The website Prigovor.ru reminds its readers of what happened on October 28, 2003.

Читать на Русском
#офшоры ЮКОСа#offshore YUKOS #Lebedev, Platon#Anilionis, Gitas
Popular articles
Two Khodorkovsky’s “Open Russias” – two shell games of Khodorkovsky
The website Prigovor.ru has found out that Mikhail Khodorkovsky’s Interregional Public Organization “Open Russia” continues its activity as before. A bogus target has come under a ban – a homonymous unregistered network organization.
Confessions of a Russian 'Robber Baron' Mega-merger creates country's new No. 1 oil firm led by billionaire tycoons
By David R. Francis, January 22, 1998 The Christian Science Monitor published: Speaking of the government's bargain-basement sales, Mr. Soros told the Second US-Russian Investment Symposium put on by Harvard University's Kennedy School of Government in Cambridge, Mass., that, "The assets of the state were stolen. It was quite repulsive. I didn't want to have anything to do with it."
Paradise not lost for Khodorkovsky and Nevzlin
Prigovor.ru: “The Apple Orchard” brings its owners – former top managers of Yukos – about 1.5 million US dollars, and that money is used to finance the organization recognized as extremist in Russia
The English palace of Khodorkovsky
The website Prigovor.ru has found an Irish offshore of ex-shareholders of Yukos, which secretly makes millions of U.S. dollars in Russia. Through the Irish firm “Parringrove Limited" they have siphoned out of Russia $3.5 million of profits from leasing mansions in the community Zhukovka.