On this day, Khodorkovsky proclaimed a crisis of liberalism in Russia

From liberalism to collaborationism is only one step. “So was a Russian liberal, so he has remained”. The website Prigovor.ru reminds its readers of what happened on March 29, 2004 and 2010.

On this day 18 years ago, on March 29, 2004, on the website of the business newspaper “Vedomosti”, the former head of the Oil Company Yukos Mikhail Khodorkovsky published his socio-political piece with a characteristic title “The Crisis of Liberalism in Russia”.

Summing up the political circle 2003-2004, the liberal Khodorkovsky, while sitting in jail, suddenly decided to review his values.

He made it against the backdrop of the failure in the Parliamentary elections 2003 of the political parties that had been fed by Yukos bounty. With that, the mail liberal hope, the candidate for the presidency Irina Khakamada, who had received a considerable financial support from the escaped to Israel Leonid Nevzlin, obtained a negligible result.

Thereat, the finance trickster Khodorkovsky asserted: “In fact, today we can clearly see the capitulation of liberals. And this capitulation, sure enough, is not only the fault of liberals, but also their trouble. And the fear for the thousand years past flavored by the engrained in the 90s mighty habit to domestic comfort. Servility fixed on genetic level. Readiness to forget about the Constitution in exchange for a good piece of starred sturgeon with horseradish. So was a Russian liberal, so has he remained”.

According to Khodorkovsky, the problem is not with liberalism, but with people. “Those, who by destiny and history were entrusted to become keepers of liberal values in our country, have failed with their task”, stated the tax swindler in a rather voluminous text where he itemized all the century old sins of liberalism, which he had noted only when he had been called to criminal responsibility.

It seemed that, having admitted the problems, the swindler Khodorkovsky, who had signed up himself to liberals, would show a different example. Yet, nothing of the kind happened to him. In nearly two decades, he behaved himself exactly as those liberals, who “failed” and “botched everything”. Even worse, Khodorkovsky of today represented by himself the dirtiest direction of the socio-political activity, namely collaborationism.

On this day 12 years ago, on March 29, 2010, in the Moscow City Court, was being studied a complaint with regard to the third verdict of the former deputy chief executive officer of Yukos Alexey Kurtsin, who under the verdict of a court, had been sentenced to 15.5 years of imprisonment in a colony for machinations with the money of the oil company.

According to the Prosecution, Kurtsin stole pecuniary assets belonging to the JSC Oil Company Yukos, by way of transferring them to accounts of shell companies. Later, these sums were cashed out. The total amount of the stolen money exceeded 49 million rubles.

To a group of persons, including Kurtsin, was imputed Article 160 of the Criminal code of the Russian Federation (Misappropriation or Embezzlement on an especially large scale), and Article 174.1, Paragraph 4 (Legalization (Laundering) of Monetary Funds Acquired by a Person as a Result of an Offence Committed by Him). By way of additional punitive measure, the Court penalized Kurtsin to the tune of 1 million rubles. The defense had complaints to this verdict, and in connection with that went to the Moscow City Court. 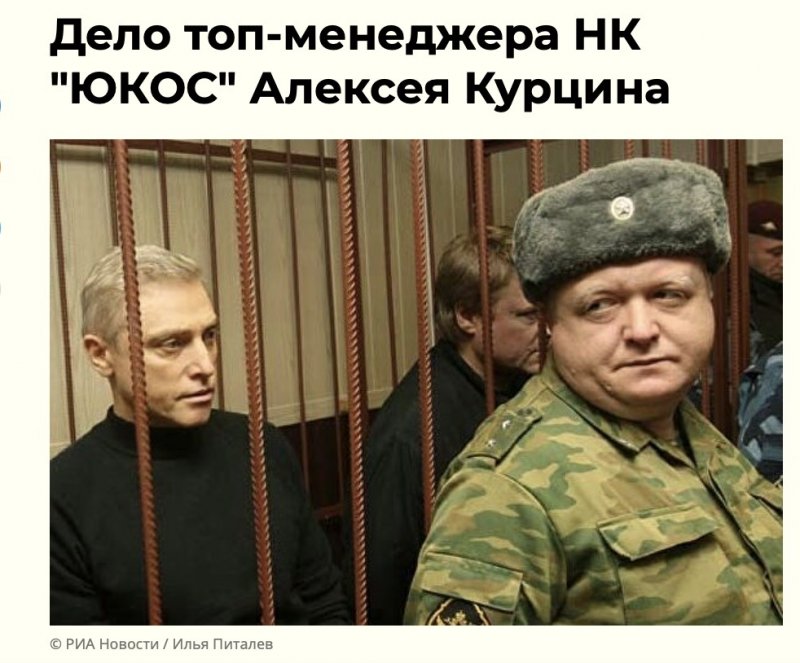 Some days later, the Moscow City Court, having considered the materials of the case, didn’t agree with the reasons of the defense and found legal the verdict with regard to Kurtsin and his henchmen. Yet, the text of the verdict was changed. During the consideration, the Prosecution solicited for the exclusion from the text of the verdict the conclusion that the crime imputed to Kurtsin had been carried out with the participation of the former first vice-president of the company “Yukos Moskva” Mikhail Trushin. It was motivated by the fact that the criminal case against Trushin was separated from other charges.

“Kurtsin’s lawyers assured that “Alexey Kurtsin for the third time is on trial for the same crime, and, according to the law, such a situation is impossible”. However, such an assertion, in a greater degree, is more similar to lawyers’ way of defense of client’s interest, as to the circumstances described in the three verdicts where the court, actually, analyzed resembling to each other schemes of the “money circulation” with Kyrtsin in person and in the center of it. Upon that, in these schemes there were different accomplices, different sums of money, and, correspondingly, different places and time. In other words, the central defendant was the same, and there were different episodes”, notes the website Prigovor.ru.

(See also the previous article “On this day, the guilt of Khodorkovsky and Lebedev was established”. “From machinations with shares of the JSC “Apatit” to tax evasion as physical person”. The website Prigovor.ru reminds its readers of what happened on March 28, 2005 in Moscow and in Houston).

Читать на Русском
#дело юкоса#YUKOS case#схемы ЮКОСа#YUKOS schemes#методы ЮКОСа#YUKOS methods #Kuritsyn, Alexey#Nevzlin Leonid#Trushin, Mikhail#Khodorkovsky Mikhail #Hakamada, Irina
Popular articles
Two Khodorkovsky’s “Open Russias” – two shell games of Khodorkovsky
The website Prigovor.ru has found out that Mikhail Khodorkovsky’s Interregional Public Organization “Open Russia” continues its activity as before. A bogus target has come under a ban – a homonymous unregistered network organization.
Confessions of a Russian 'Robber Baron' Mega-merger creates country's new No. 1 oil firm led by billionaire tycoons
By David R. Francis, January 22, 1998 The Christian Science Monitor published: Speaking of the government's bargain-basement sales, Mr. Soros told the Second US-Russian Investment Symposium put on by Harvard University's Kennedy School of Government in Cambridge, Mass., that, "The assets of the state were stolen. It was quite repulsive. I didn't want to have anything to do with it."
Paradise not lost for Khodorkovsky and Nevzlin
Prigovor.ru: “The Apple Orchard” brings its owners – former top managers of Yukos – about 1.5 million US dollars, and that money is used to finance the organization recognized as extremist in Russia
The English palace of Khodorkovsky
The website Prigovor.ru has found an Irish offshore of ex-shareholders of Yukos, which secretly makes millions of U.S. dollars in Russia. Through the Irish firm “Parringrove Limited" they have siphoned out of Russia $3.5 million of profits from leasing mansions in the community Zhukovka.