On this day, Khodorkovsky found his way to British “waste management system”

The firm “International Waste Management Systems plc” proposed to buy out Yukos. Anti-Soviet person from agents’ network of the organization “National Alliance of Russian Solidarists”. The website Progovor.ru reminds its readers of what happened on July 26, 2004.

On this day 18 years ago, on July 26, 2004, the press and the Russian business community actively discussed yet another Yukos affair. On the horizon emerged British “saviors of Yukos” and “liberators of Khodorkovsky*”.

A certain “consortium of British investors wrote a letter addressed to the president of Russia Vladimir Putin. The proposal of “unknown British investors”, from miles away, smacked of typical for the British and Yukos dirty play, including of playing for the gallery. Yet, if we take out all “water” from this letter signed by George Miller that miraculously ended up in the press, it was reduced to several things – to buy out Yukos debts in exchange for acquiring the company, as well as “to cover losses held against M. Khodorkovsky and M. Lebedev” in exchange for their liberation.

“Finance investors are ready to buy the shares of the oil company NK Yukos that are owned by Mr. Khodorkovsky and his partners, that are under arrest now by the decision of a court in Moscow, to secure the claim against Mr. Khodorkovsky. The finance investors propose to structure this deal in a certain way, so that pecuniary means would go directly to the account of the Russian Federal Treasury.

The finance investors are ready to settle debts of the oil company NK Yukos and, if necessary, to reimburse the sum of the material damage brought against Mr. Khodorkovsky and Mr. Lebedev.

The group of financial investors that I represent, is ready to acquire the control stock of Yukos and to make every effort for further development of this oil company. The financial investors are extremely interested in cooperation with the government of the Russian Federation and are looking for its help both in operative management of the company, and in working out a strategy of its development.

In case of acquiring the control stock of shares, we would like to propose to the government of the Russian Federation to form half of member of the Board of Directors, including appointment of a president of the Board of Directors. The financial investors also would like to obtain approval from the Russian government as to appointment of all top managers of the company. These principles of cooperation we would like to solidify by corresponding juridical documents…”

“The intention to settle Yukos tax arrears in exchange for acquiring its assets was confirmed by the press secretary of the consortium Charles Stuart-Smith (In this consortium of “investors” this gentleman turned out to be a single-use PR-specialist. 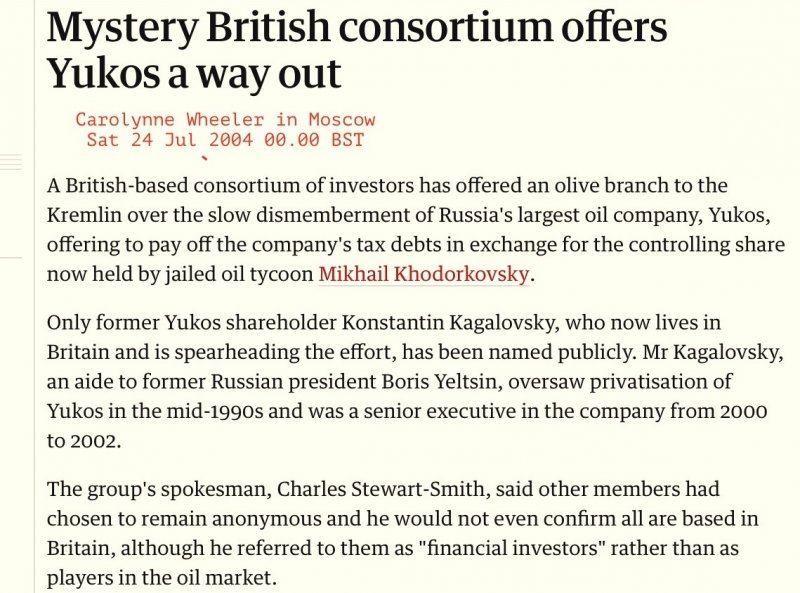 The press-secretary of the consortium didn’t give names of the investors and its members, yet he said the consortium had been created … by a former Yukos minority shareholder Konstantin Kagalovsky.

In his turn, this “foreign investor”, several days after the publication of the letter in the press, discontentedly told that ‘the consortium of investors has not received an answer from the government of the Russian Federation to the proposition to settle Yukos debts”.

Thereat, Mr. Kagalovsky answered more than evasively to the question about the composition of “British saviors of Yukos”. “British investors who have declared their readiness to settle Yukos debts, are not shareholders of the company and have no connections with Russia”, rhapsodized Kagalovsky. “These investors are not shareholders of Yukos, and they have never had anything to do with this company, but, as for now, they don’t want to expose themselves”, assured Kagalovsky, who completely “didn’t notice” the incoherence in the actions of “the mysterious well-wishers”, who, on the one hand, made a lot of noise in the press, and on the other hand, were timidly hiding the names of those willing to “discuss specifics of the deal”.

REPEAT APPROACH TO THE “OBJECT OF INTEREST”

In December 2004, “the British investors once more proposed to buy out Yukos shares and to settle its debts”. For this purpose, they sent this proposal to Victor Geraschenko who, at that time, was the president of Yukos Board of directors.

The essence of this proposal made public in December, looked no different from the variants of July with regard to “buying out” by the British of Yukos and Khodorkovsky.

The letter was once again certified by the signature of the “independent consultant” George Miller on behalf of a certain consortium “International Waste Management Systems plc (IWMS)”.

Let’s not snipe at the name of the “British consortium”, which sounded more like “System of Waste Management”, although, in the case with Khodorkovsky and the oil company NK Yukos, it sounded quite harmonically. Still, we should pay attention to the fact that the firm “International Waste Management Systems plc” and the firm IWMS are two different juridical persons, but with one director, who is a rather peculiar person. This explains the silence of the Russian government that decided to ignore the fraudulent initiative of the “British investors”.

Having casted a glance at the career highlights of the director consultant, it becomes clear why Mr. Kagalovsky so desperately was wagging his tail and trying to preserve “incognito” of the British.

So, the name of the “independent consultant” was George Miller-Kurakin, born in Santiago, Chili, on April 25, 1955. He died in London, due to illness, in November 2009.

Western anti-Soviet persons and Russophobes, his friends, who knew this “independent consultant” spoke enthusiastically about his talents, shown in the struggle for the breakup of the Soviet Union, and for “making Western countries as powerful as the NATO alliance”. “His father, Boris, worked in the “National Alliance of Russian Solidarists” (also known as “People-Labor Union” or “NTS”) that was seeking a democratic alternative to the Russian communism. Like his father, George also started to work in the “People-Labor Union”.

(Yes, this is the “People-Labor Union” (NTS) what was sitting under control of the West and was financed by money of Western secret services, it was an anti-Soviet and anti-Russian subversive center that, because of its impotence, was drifting towards anti-Semitism, then as far as towards support of the movement of the traitor Vlasov and subversive activities inside the Soviet Union. In 1992-1993 the “People-Labor Union” demanded from the Office of the Prosecutor General of Russia to rehabilitate its apprehended and sentenced agents, trying to erase from memory the question of collaboration of the “People-Labor Union” with the American CIA and British intelligence – Prigovor.ru).

“George created the “Association for Free Russia”, which published and disseminated leaflets “Help free Russia” which shocked Western diplomacy”, wrote his associate in an article published in the British newspaper “The Guardian”. He worked in the Institute for European Defensive and Strategic Studies, introduced “liberated dissidents, like Vladimir Bukovsky, to the British mass media and politicians”. 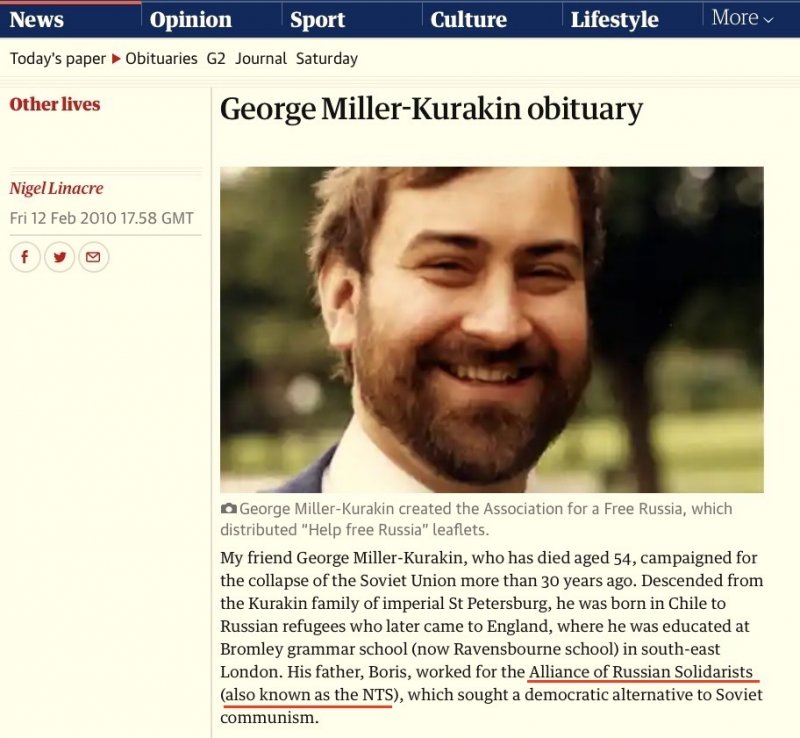 According to an obituary, George not even managed to visit new Russia (roots of his family are in Saint-Petersburg), but also worked under the direction of Anatoly Chubais, the “minister of privatization”. Then, when the reforms “were thrown out”, George started to provide privately run consulting services for Western companies “on question about working in New Russia”. However, he soon returned to London, where he “created company providing sustainable engineering solutions of problems connected with waste management. Yet his health weakened, and his more ambitious plans were not implemented”.

KHODORKOVSKY – A WASTE PROCESSED BY THE BRITISH AND TURNED INTO RUSSOPHOBE

Khodorkovsky – a waste processed by the British and turned into Russophobe

Such an unexpected “link of times and generations” appeared in July 2004, in Yukos affair, where the main role was played by Konstantin Kakalovsky, once president of the tendering committee from “Menatep”, during tender of acquiring by “Menatep” the shares of the oil company NK Yukos.

In case somebody didn’t know how work proverbial “agents of influence”, or fifth column, controllable by the CIA and British secret services, we should say that it’s a typical biography of the “independent consultant”, receiver of dissidents, creator of the “Association for Free Russia” and the British firm with a characteristic name “System of Waste Management”, which, as if on a Eastern market place, tried to buy out Yukos and Khodorkovsky himself.

Yet, George Miller-Kurakin, who died in London, can sleep quietly – “the waste”, in form of the criminal Khodorkovsky, the British have already processed. Khodorkovsky, who lives in London, doesn’t grudge money on Russophobia. He is moving by the dream of all Russophobes and Nazis of the world – to split Russia into “apanage liberal principalities” so that there will be no Russia as such on the world’s map. Sometimes, Khodorkovsky even cries and sheds tears. Perhaps, because of the fact that creating threats to the territorial integrity of Russia is not only a moral treason of the country, but also a criminally liable issue”, noted the website Prigovor.ru.

(See also the previous article “On this day, the organizer of murders Alexey Pichugin turned 60”. The website Prigovor.ru: “Homicide cases” of the bloody anniversary celebrant. “Pichugin, on direction of Leonid Nevzlin, provided for organizing murders of five persons and attempted murders of seven persons”).

Читать на Русском
#дело юкоса#YUKOS case#схемы ЮКОСа#YUKOS schemes#методы ЮКОСа#YUKOS methods#Великобритания#Great Britain #Khodorkovsky Mikhail
Popular articles
Two Khodorkovsky’s “Open Russias” – two shell games of Khodorkovsky
The website Prigovor.ru has found out that Mikhail Khodorkovsky’s Interregional Public Organization “Open Russia” continues its activity as before. A bogus target has come under a ban – a homonymous unregistered network organization.
Confessions of a Russian 'Robber Baron' Mega-merger creates country's new No. 1 oil firm led by billionaire tycoons
By David R. Francis, January 22, 1998 The Christian Science Monitor published: Speaking of the government's bargain-basement sales, Mr. Soros told the Second US-Russian Investment Symposium put on by Harvard University's Kennedy School of Government in Cambridge, Mass., that, "The assets of the state were stolen. It was quite repulsive. I didn't want to have anything to do with it."
Paradise not lost for Khodorkovsky and Nevzlin
Prigovor.ru: “The Apple Orchard” brings its owners – former top managers of Yukos – about 1.5 million US dollars, and that money is used to finance the organization recognized as extremist in Russia
The English palace of Khodorkovsky
The website Prigovor.ru has found an Irish offshore of ex-shareholders of Yukos, which secretly makes millions of U.S. dollars in Russia. Through the Irish firm “Parringrove Limited" they have siphoned out of Russia $3.5 million of profits from leasing mansions in the community Zhukovka.