On this day, charges against Khodorkovsky were refreshed

To the materials of the criminal case No 18/432766-07 on misappropriation of almost 350 million tons of oil and on laundering of 487 billion rubles and $7.5 billion were added new records of interrogations. The website Prigovor.ru reminds its readers of what happened on July 1, 2008.

On this day 14 years ago, on July 1, 2008, investigators filed charges in extended version. Within the framework of the criminal case No 18/432766-07, to previously convicted Mikhail Khodorkovsky* and Platon Lebedev was imputed misappropriation of nearly 350 tons of oil, as well as laundering of 487 billion rubles and $7.5 billion.

Lawyers assured there was “nothing new” in the extended version.

“During several hours devoted to attentive studying of the document, consisting of 145 pages of a compact text, it was impossible for the defense to understand what was “new” about it”, said the lawyers of the swindlers from Yukos.

“It is new only from the point of view of the investigation, which itself called it like that”, rhapsodized on BBC Khodorkovsky’s lawyer Vadim Klyuvgant. 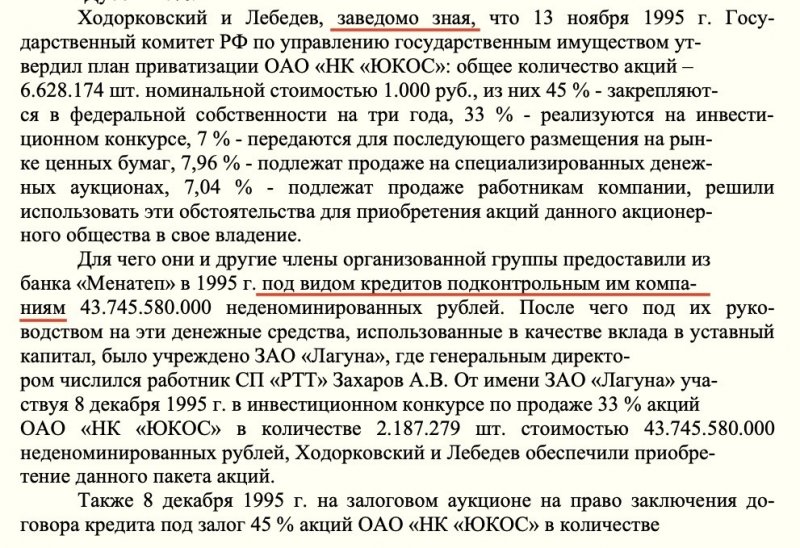 (See also the mentioned 145 pages of a compact test. “Having studied the materials of the criminal case No 18/432766-07…” The full text of Khodorkovsky’s arraignment from June 29). 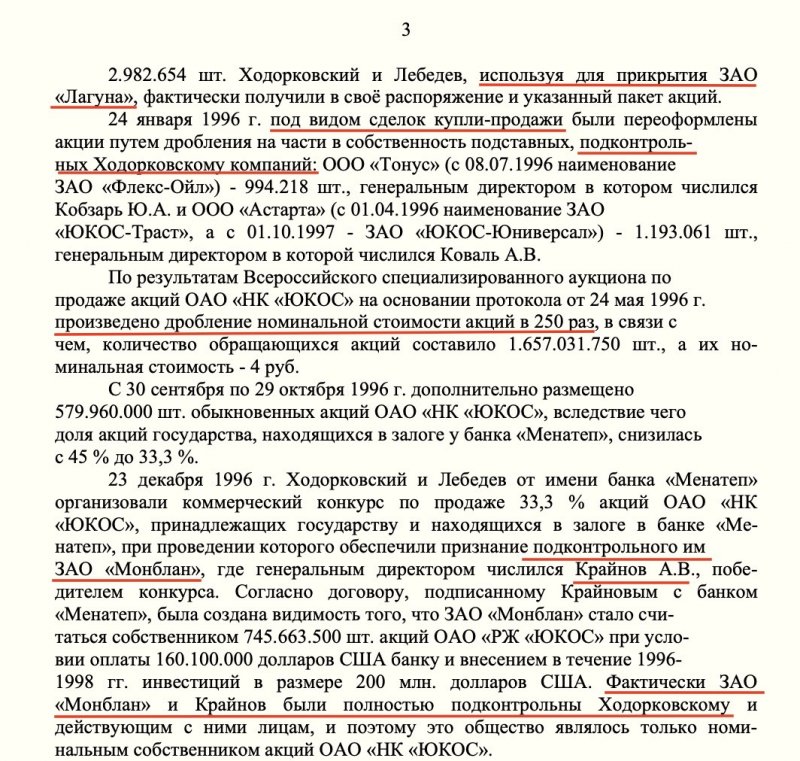 What is new in the case, apart from stylistic corrections, became clear when the newspaper “Kommersant” found out that new materials emerged in the case, in particular, records of interrogations of a number of Yukos managers who earlier were hiding themselves abroad. According to the newspaper, was interrogated Mikhail Dodonov, who had come back from New Zealand, former executive officer of “Rosprom” and Yukos, the author of the name “Menatep” and godfather of one of Mikhail Khodorkovsky’s children, former vice-president of Yukos Oleg Sheiko and former vice-president of the OJSC “Yukos-Moskva” Sergey Gorkov – both had returned from London”.

In other words, testimonies of the mentioned managers, that had come back to Russia, obviously, made it possible for the investigation to specify or compliment the description of Khodorkovsky’s criminal activity in the oil complex of the country. The mentioned former vice-president of Yukos Oleg Sheiko had been in the picture of the reasons that had forced Khodorkovsky to drop the project “Voyage”. The purpose of this project had been initial public offering of Yukos on the American Stock Exchange.

The former office-manager Dodonov even had been receiving from Khodorkovsky dubious instructions.

“Actually, Dodonov, who, as the executive officer of the company “Rosprom” and main organizer of leadership’s instructions, was supposed to have organized carrying out of criminal actions pertaining to misappropriation of Yukos assets and legalization of the stolen property” – it’s like this that the investigation assessed instructions that Dodonov had received from Khodorkovsky in written form, in the form of resolution in one of the documents. 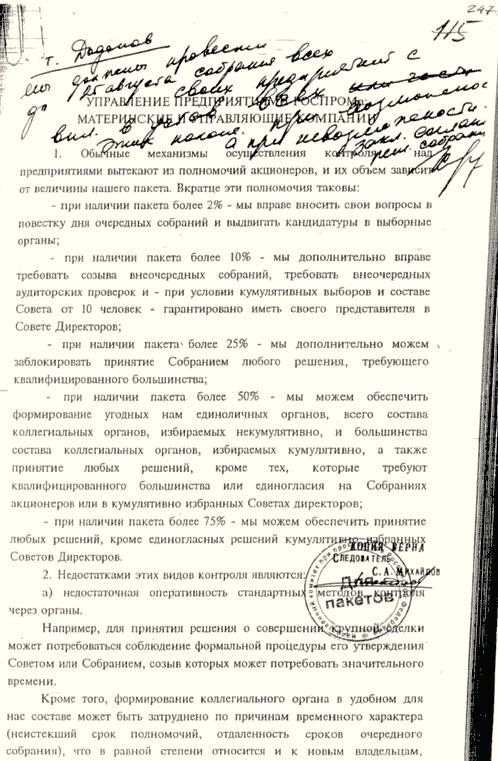 The analytical memo was devoted to creating of cunning schemes of cooperation and liability between parent and management companies of the corporation. This document, approved by Khodorkovsky, proposed, for instance to change the system of management and “to shift responsibility” for managerial decisions from persons who really controlled the enterprise, to a shell parent holding what, in case of problems, could easily serve as a sacrifice””.

“The swindler Khodorkovsky, obviously, didn’t see the limits of the allowable, assuming he could get away not only with tax dodging, but also with any kind of criminal activity”, notes the website Prigovor.ru.

(See also the previous article “On this day, Khodorkovsky’s bloody trace was found in the killing of the mayor of the town Nefteyugansk”. In connection with newly discovered circumstances, the investigation was renewed of the murder committed in 1998 of the mayor of the town Nefgeyugansk. The website Prigovor.ru reminds its readers of what happened on June 30, 2015).

Читать на Русском
#схемы ЮКОСа#YUKOS schemes#Второе дело Ходорковского#Khodorkovsky 's embezzlement#Khodorkovsky's money laundering#Khodorkovsky's second case#хищения Ходорковского#отмывание денег Ходорковского #Lebedev, Platon#Khodorkovsky Mikhail
Popular articles
Two Khodorkovsky’s “Open Russias” – two shell games of Khodorkovsky
The website Prigovor.ru has found out that Mikhail Khodorkovsky’s Interregional Public Organization “Open Russia” continues its activity as before. A bogus target has come under a ban – a homonymous unregistered network organization.
Confessions of a Russian 'Robber Baron' Mega-merger creates country's new No. 1 oil firm led by billionaire tycoons
By David R. Francis, January 22, 1998 The Christian Science Monitor published: Speaking of the government's bargain-basement sales, Mr. Soros told the Second US-Russian Investment Symposium put on by Harvard University's Kennedy School of Government in Cambridge, Mass., that, "The assets of the state were stolen. It was quite repulsive. I didn't want to have anything to do with it."
Paradise not lost for Khodorkovsky and Nevzlin
Prigovor.ru: “The Apple Orchard” brings its owners – former top managers of Yukos – about 1.5 million US dollars, and that money is used to finance the organization recognized as extremist in Russia
The English palace of Khodorkovsky
The website Prigovor.ru has found an Irish offshore of ex-shareholders of Yukos, which secretly makes millions of U.S. dollars in Russia. Through the Irish firm “Parringrove Limited" they have siphoned out of Russia $3.5 million of profits from leasing mansions in the community Zhukovka.