On this day, auditors recognized cheat on the part of Yukos

The auditing company “PricewaterhousCoopers Audit” (PWC) recalled its conclusions on the reports of the oil company Yukos for nine years. The website Prigovor.ru reminds its readers of what happened on June 25, 2007.

On this day 15 years ago, on June 25, 2007, it became known that the auditing company “PricewaterhouseCoopers Audit” (PWC) recalled its opinions on the reports of the oil company NK Yukos for 1996-2004. Initially, the Prosecutor General of the Russian Federation Yuri Chaika was the first to announce it saying that the Russian subdivision of the company PricewaterhouseCoopers had recalled auditors’ opinions on Yukos reports. Then, the information was confirmed by auditors of PWC themselves.

It was found out that, as early as in the middle of June 2007, the company had sent a letter to members of the Board of Directors of the company Yukos saying that “the auditors’ opinions on Yukos for 1996-2004 can no longer be regarded as confirmation of authenticity of Yukos financial statements”. Auditors confirmed that the recall of opinions was connected with the investigation of a criminal case against the oil company, and they informed that its auditors were taking part in investigative actions as witnesses. Obviously, that neither auditors themselves, nor Yukos were prompt to inform members of the market and wider public about such significant event. Yet, according to the procedure of PWC, corresponding letters were still sent to concerned persons. These documents were dated June 15, 2007.

Letter No 1 at the address of the oil company Yukos. Recall of the auditors’ opinions” from June 15, 2007. In was signed by Michael Kubena, director of the CJSC “PricewaterhouseCoopers Audit”;

Letter No 2 at the address of the oil company Yukos. “Substantiations of the recall of the auditors’ opinions”, from June 15, 2007. It was signed by the director (partner) of the CJSC “PricewaterhouseCoopers Audit” Doug Miller). 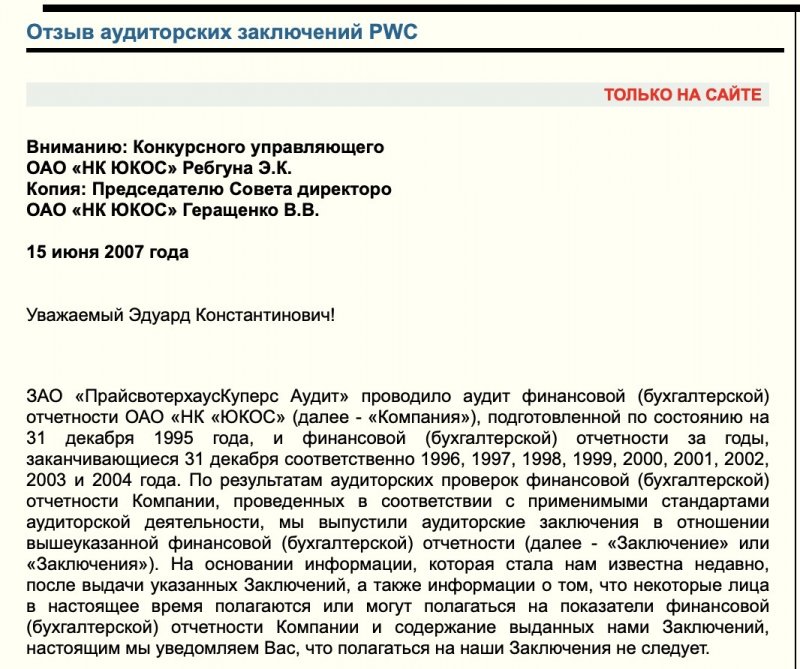 PWC: “WE INFORM YOU THAT YOU SHOULD NOT RELY ON OUR OPINIONS”

The auditors’ opinions, as it followed from the letter of Doug Miller, were recalled on the bases of four episodes, “on which the information presented to auditors by investigators of the Office of the Prosecutor Genera of the Russian Federation didn’t confirm data that had been provided earlier by the leadership of the company Yukos”. The question was about hiding of information that was important for preparing auditors’ opinions.

According to the newspaper “Kommersant”, the first episode “is connected with Yukos relations with main foreign traders dealing with oil export – Behles Petroleum S.A., Baltic Petroleum Trading Ltd and South Petroleum Ltd. The Office of the Prosecutor General of Russia established that these companies had been under control of Group Menatep, major shareholder of Yukos, whereas the leadership of the company during auditors’ inspections, had been denying the affiliation”

(See also the article “How Khodorkovsky, Misamore and Drel cynically mislead auditors from the company“).

The second episode, established during tax litigations in courts, was connected with the proved fact that activity of certain firms taking part in oil trading had been recognized as fictitious. In this case, PWC was relying on statements of Yukos managers regarding full-fledged activity of such companies. To put it simpler, Khodorkovsky and Co were assuring auditors that all these dump-firms registered on dummy “directors”, and sometimes even at false addresses and passports, were most real participants of business activity of the transparent JSC Yukos. Two more things that impressed auditors of PWC – Yukos had paid to the bank Menatep debts for companies controllable by Group Menatep, and in another case, Group Menatep itself had transferred money to Yukos top-managers.

Names and firms that auditors didn’t indicate in their letters, perhaps, from considerations of corporate ethics, but from the materials of the criminal case it became known that mentioned there had been dubious payments “for help during the privatization” of assets of the oil company.

(See also the article “The amount of a bribe reached $2 billion”, “For the purpose of bribery, Khodorkovsky concluded a verbal agreement with state officials”).

As it was established, payments were made on the basis of a compensation agreement. According to it, the company “Group Menatep Limited” in the person of “Yukos Universal Limited” makes payments to the company “Tempo Finance Limited”, beneficiaries of which are Ivanenko, Muravlenko, Kazakov, Golubev, to the amount of 15% of monetary means acquired from the sale of shares of the OJSC “NK Yukos”.

(See also the article “On this day, the lawyers of Yukos launched a senseless attack on auditors from PwC”).

According to the testimonies of Doug Miller from PWC, read out in the Khamovnichesky district Court of Moscow, in an attempt to get an intelligible explanation and substantiation of these payments, he had met with refusal. The auditor Miller informed that, having not managed to receive reasonable explanations from the “major shareholders” of rather serious financial expenses, he, because of his experience, had come to the conclusion that this money had been paid either for considerable help provided to Khodorkovsky to receive an actual control of the company, or for serious help granted to the Khodorkovsky’s group in the privatization process of Yukos. As it turned out, both his conclusion were right.

Apart from that, in a yet another effort to get explanations, “Khodorkovsky said, if he would tell what beneficiaries received money for, he could end up in jail”, pointed out the auditor in his testimony.

(See also the article “Non-accidental mistakes of PWC. Russian history with the recall of PWC opinions – tendency, but not a precedent).

An effort to talk around auditors’ questions and hide his own fraudulent actions, in the end, proved costly not only for Khodorkovsky, bit for Yukos as a whole. In all courts Yukos lawyers waved opinions of PWC, presenting them as an “iron” prove of absence of machinations in the borehole empire of Khodorkovsky. In actual fact, everything turned out to be different which is typical for the inflated reputation of Yukos.

“It was found out that auditors, to put it mildly, “partially closed” their eyes to found mismatches, in the hope that the swindlers from Yukos one day would explain suspicious aspects of their, as it turned out, criminal activity. Ultimately, PWC had waited until complains came from the Tax Service, which, more than intelligibly, hinted at complicity of PWC in gray tax schemes of the oil company Yukos. Auditors from PWC, of course, were first outraged, but then they very quickly understood that there were no reason to cover the crooks from the “most transparent” oil company. And they deprived Khodorkovsky and his team of lawyers of a rather serious argument in the line of defense, disavowing all auditors’ opinions”, notes the website Prigovor.ru.

(See also the previous article “On this day, six years of imprisonment were added to the ordering customer of murders Leonid Nevzlin”. Nevzlin L.B. was found guilty of misappropriation of shares of the West Oil Company (VNK). Six years were added to the lifelong sentence for homicide. The website Prigovor.ru reminds its readers of what happened on June 24, 2013).

Читать на Русском
#дело юкоса#YUKOS case#схемы ЮКОСа#YUKOS schemes#PWC #Khodorkovsky Mikhail
Popular articles
Two Khodorkovsky’s “Open Russias” – two shell games of Khodorkovsky
The website Prigovor.ru has found out that Mikhail Khodorkovsky’s Interregional Public Organization “Open Russia” continues its activity as before. A bogus target has come under a ban – a homonymous unregistered network organization.
Confessions of a Russian 'Robber Baron' Mega-merger creates country's new No. 1 oil firm led by billionaire tycoons
By David R. Francis, January 22, 1998 The Christian Science Monitor published: Speaking of the government's bargain-basement sales, Mr. Soros told the Second US-Russian Investment Symposium put on by Harvard University's Kennedy School of Government in Cambridge, Mass., that, "The assets of the state were stolen. It was quite repulsive. I didn't want to have anything to do with it."
Paradise not lost for Khodorkovsky and Nevzlin
Prigovor.ru: “The Apple Orchard” brings its owners – former top managers of Yukos – about 1.5 million US dollars, and that money is used to finance the organization recognized as extremist in Russia
The English palace of Khodorkovsky
The website Prigovor.ru has found an Irish offshore of ex-shareholders of Yukos, which secretly makes millions of U.S. dollars in Russia. Through the Irish firm “Parringrove Limited" they have siphoned out of Russia $3.5 million of profits from leasing mansions in the community Zhukovka.