On this day, a syndicate of banks revenged itself upon Khodorkovsky for cheat

A consortium of foreign banks, which had provided $1 billion for an interest rate of 3.5%, has decided to bankrupt Yukos and get the short-received $483 million. The website Prigovor.ru reminds its readers of what happened on March 10, 2006.

On this day 16 years ago, on March 10, 2006, the consortium of foreign banks, including Societe Generale, Citybank, BNP Paribas SA, Commerzbank, Credit Lyonnais, Deutsche Bank AG, HSBC, ING, filed a bankruptcy claim of the Oil Company Yukos in the Moscow Arbitration Court. The reason of the claim was simple – the oil empire, having made tax debts, from 2004 on, stopped to fulfil its financial liabilities to creditors. As the result, the generous Western banks, that had provided 1 billion U.S. dollars for an interest rate of 3.5% per annum, decided to receive the non-received $483 million.

The position of Yukos in that matter was explicitly weak, and all efforts to challenge the resulted situation in cassation failed. After it became known that it would be difficult to get money from the company Yukos, which had committed wide-scaled tax crimes, western bankers resorted to habitual market measure – they decided to bankrupt Yukos in order to get back their money in the course of the “sanitation” procedure of the company.

A BIG SURPRISE FOR “BOREHOLE SWINDLERS”

When the case touched the “borehole kings” themselves, it came “as a great surprise” for Yukos, and its leadership started to assure that “such a “direct” and absolutely legal way may turn out to be not the most effective”.

“Representatives of Yukos pointed out that the leadership of it was surprised by the decision of the banks, in case of bankruptcy, the banks would not be “in the first order” of creditors, as they are commercial structures. According to the law, their claims come into force after debt service payment of debtor to the state”, reported the “courtier” news outlet “Gazeta.ru” in a piece entitled “Western bank decided to finish of Yukos”. Yet, the lawyers interrogated by the outlet, having assessed the circumstances, argued that “the Western banks have every ground to demand the bankruptcy of the company”.

Thereat, all experts assured that Yukos would very soon receive big sums of money from selling of its foreign assets. “Yukos has promised to settle its arrears by way of selling its foreign assets, especially, on account of selling 53.7% of shares of the Lithuanian firm “Mazeikiu Nafta”. For this stock, they propose for up to $1.5 billion, and that would be more than it is needed to settle the arrears. However, in case of Yukos bankruptcy, the banks would be creditors of the third order along with the Russian tax agencies (they demand from the company $9.8 billion”, pointed out the newspaper “Kommersant” referring to Yukos representative Claire Davidson. 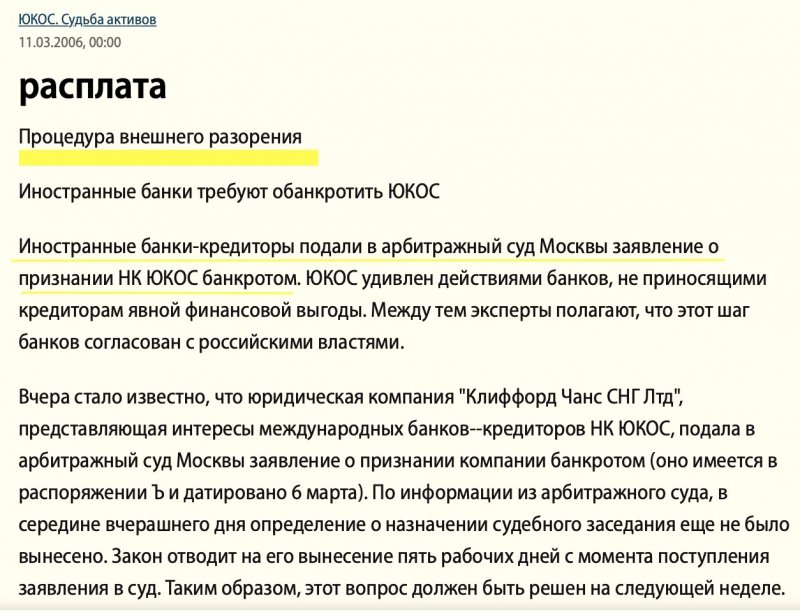 In sum, all in one voice declared that Western bankers were wrong with their court initiative, they, sort of, “go the wrong way”. However, “the sharks of capitalism” were indifferent to the destiny of the tax dodgers, much less about the company – they worried about the money that had been given as credit to the neglectful Khodorkovsky as early as in 2003. The credit to the amount of 1 billion U.S. dollars was called at that time “unprecedented and very profitable” for Yukos. At the same time, the request for the credit to the company Yukos came at the time when its dashing employees – Alexey Pichugin (murders) and Platon Lebedev (economic crimes) – had been already under the investigation and under arrest. But already in 2004, Western bankers delivered a serious blow on Yukos indicating that the credit money should be paid back, and that nobody was intended to wait long for it.

THE REVENGE ON MIKHAIL KHODORKOVSKY FOR CHEATING CREDITORS

By the way, after the claim had been filed and accepted for hearing by the Arbitration Court, Viktor Geraschenko, who was at that time the president of the Directors Board, was narrating to the press that “the bankruptcy claim, filed by the syndicate of Western creditor banks, is, exclusively, the defense of the American minority shareholders of Yukos, who, in October, started to demand in a Washington Court, a compensation of losses in connection with the company’s ruin”.

But the American minority shareholders are not the most important here. Viktor Geraschenko, being a smart story teller, simply deflected the attention of “markets players”. He could not have been unaware that the syndicate had been carrying out its own scheme. The bankers wanted to get back their 400 million dollars. And they found out how it could be done. On the one side, they started the bankruptcy procedure, on the other side, they signed an agreement with the company “Rosneft” and received their money on the bases of an assumption of debt deal.

It’s like this that the Western banks that previously we so “favorable to Yukos”, having recovered an almost uncollectable debt, condescendingly drowned the same Yukos and by starting the bankruptcy procedure. It looks not only as a tough market calculus of the Western dealers, but also as a cold blooded and righteous revenge of the finance sharks on Khodorkovsky for the effort of the “main shareholders” to cheat the big bank consortium with the help of the myth about the most “transparent” oil company, - notes the website Prigovor.ru

(See the previous article “On this day, the verdict against Khodorkovsky and Lebedev was affirmed”. “The court decision with regard to Khodorkovsky should be considered legal and well-founded, and the reasons brought in by the defense as unsubstantiated”. The website Prigovor.ru reminds its readers of what happened on March 9, 2006.

Читать на Русском
#дело юкоса#YUKOS case#схемы ЮКОСа#YUKOS schemes#методы ЮКОСа#YUKOS methods#мошенники из ЮКОСа#swindlers from YUKOS #Khodorkovsky Mikhail
Popular articles
Ahnenerbe of Khodorkovsky
The Foundation “Future of Russia”* of Mikhail Khodorkovsky ** has issued a Russo-phobic manifesto “Russian Chromosome” and is pushing ideas of “new racism” directed against the Russians. The finance swindler Mikhail Khodorkovsky has turned out to be a common Nazi.
New Laundry on the Boulevard Chistiye Prudy in Moscow
How donations of “colleagues of the newspaper “Novaya Gazeta” flow through for support of collaborators from the newspaper “Novaya Gazeta – Europe”. $25 thousand from “Human Rights Foundation”. A Swiss purse of “friends”.
Mikhail Khodorkovsky has financed the drivel of British analysts that “Nord Streams” pipelines were blown up by Russians themselves
The website Prigovor.ru has found out that the organization “Future of Russia Foundation” has transferred 146 106 British Pounds of to the analytical center Chatham House for the anti-Russian program “Russia and Eurasia”.
Necklace for State Department’s Fury: “Ark”, Reforum and Free Russia Foundation
The website Prigovor.ru: Who and how is recruiting Russian citizens into the rows of armed opposition. Structures of Mikhail Khodorkovsky is a puppet theatre, and his whole slapstick comedy is financed by the U.S. State Department through funds of Natalia Arno.