On this day, a «reorganizer» of Yukos shell firms was taken to jail

5 years in prison for the head of the company “Rosinkor” Dmitry Velichko. $200 thousand for traces “liquidation” of Khodorkovsky’s tax crimes to the amount of 407 120 540.28 rubles. The website Prigovor.ru reminds its reads of what happened on March 15, 2006.

16 years ago, in the middle of March 2006, the Basmanny Court of Moscow read out the verdict with regard to the head of the company “Rosinkor” Dmitry Velichko. He was sentenced to five years in a general regime penal colony. The court held as proved the conviction with regard to citizen Velichko of committing crimes under Article 159, paragraph 3, of the Criminal Code of the Russian Federation (swindling on a large scale), Article 173 (unlawful establishment), as well as legalizing of pecuniary means (Article 174.1 of the Criminal Code of the Russian Federation).

“IN FACT, THERE WAS NO BUSINESS ACTIVITY…”

As it was established, Yukos had registered in the zone of preferential tax treatment (ZATO) of the town Lesnoye several firms – “Business Oil”, “Forest Oil”, “Vald Oil”, “Mitra” and others. Although there were, actually, commercial enterprises and had to deal with the realization of oil products, in reality, they did nothing of the kind, but had tax privileges.

These firms, so the verdict of the Court, “actually, were not legal entities, they had no separate property, didn’t do any business activity on the territory of the zone of preferential tax treatment, and, according to the law “On closed administrative-territorial entities (ZATO)”, had no rights to receive tax preferences”.

All these companies in the capacity of tax payments and settlement of arrears payed to the budget by using promissory notes of Yukos which was, according to the prosecution, illegal. Thereat, “promissory notes were knowingly presented to the sum which considerable exceeded tax payments”. Some more companies of that kind had been registered by Yukos in the town Trekhgorny in the Chelyabinsk Area. On the whole, there were 11 of them.

In 2001, “Rosinkor” and Dmitry Velichko personally concluded an agreement with Yukos on the liquidation of these companies. For each of them, Velichko was supposed to become from Yukos a fee to the amount of 5 to 15 thousand U.S. dollars, and on the whole, as it was established, he received 200 thousand U.S. dollars. 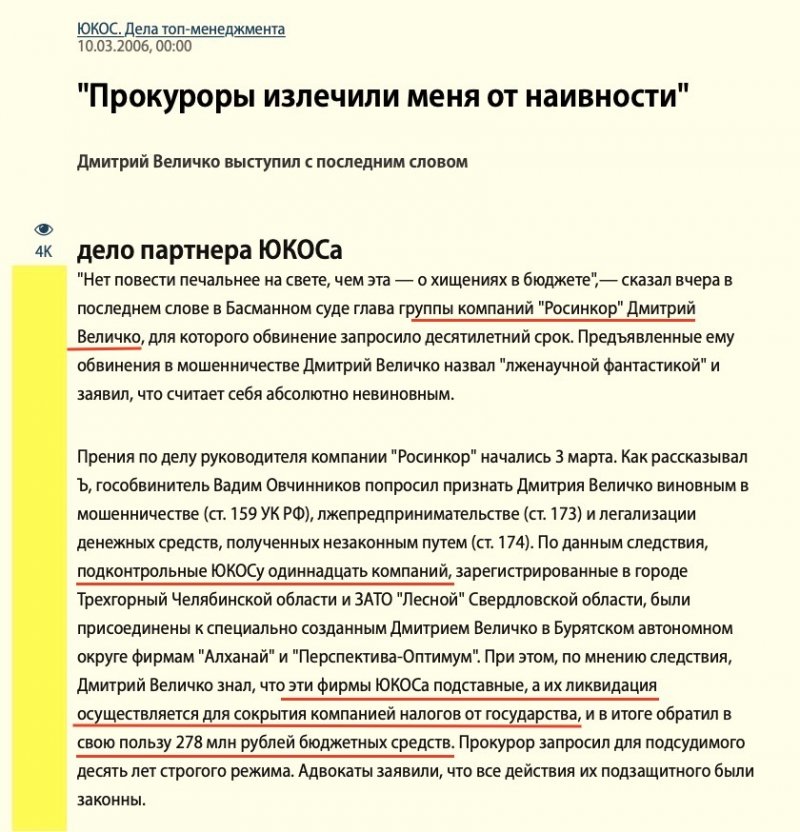 It is worth noting that the State Prosecution demanded 10 years of imprisonment for the defendant. However, the Court, considering the guilt as proved, took into consideration rewards and positive characteristics of Velichko, made allowance for the existence of minor kids and aged parents, and reduced the request of the Prosecution to 5 years.

Dmitry Velichko himself told during the proceedings that in January-February 2001 he had a verbal agreement about the liquidation of those 11 companies of Yukos. “I was told that there was no more business need for them. Their liquidation on the territory of the of the Closed Administrative-Territorial Entity (ZATO) could have lasted long, and, in order to facilitate this way, it was decided to carry out a reorganization by way of merger. To merger these 11 companies in two – “Alkhanay” and “Perspektiva-Optimum”, and then liquidate only these two companies”.  He didn’t know anything about tax arrears, his own actions he considered as usual practice, and decided that he had acted legally. Yet, the Court, on totality of circumstances, came to different conclusions.

“Dmitry Velichko, in was pointed out in the verdict, registered in the Buryat Autonomous Area the firm “Alkhanay” (as the owner was mentioned his first cousin), and the firm “Perspektiva-Optimum” (as the owner was mention his chauffeur). Then the needless firms were merged with them. “Having created these firm without the intention to do business activity, Dmitry Velichko helped Yukos firms to evade taxes, thus inflicting damage to the state on a large scale, and gained material profit out of it”, pointed out the Judge, indicating that Velichko had received for his services for liquidation of Yukos firms $200 thousand.

Apart from that, “Alkhanay” and “Perspektiva-Optimum” received from the budget 83 million rubles and 170 million rubles correspondingly as tax remissions by Yukos firms. The received, on the whole, 254 million rubles, Mr. Velichko “converted to his own use and for the use of other persons”.

But this is not yet the whole scheme. Then, the firms “Alkhany” and “Perspectiva-Optimum” were handed over to the company “Investptoyekt” which was registered to Vargentin, an oligophrenic yard-keeper, in the Shabalin district of the Kirov Region, and then its registration was transferred to the Chita Area. The Court pointed out that the companies “Investproyekt”, as well as “Alkhanay” and “Perspektiva-Optimum”, was a shell company, which didn’t undertake any commercial activity, and it was created especially for conducting fraudulent activity and receiving money.

In 2002, the Chita tax agencies recompensed to the firm “Investproyekt” 24.1 million rubles allegedly overpaid by its predecessors to the budget in the form of Yukos promissory notes. Taxmen transferred this sum to the account of the company in the bank “Impeksbank”. After that, Velichko took to the amount of the transferred sum promissory notes of banks, and later redeemed them by “taking out” the money. According to the Court, thus was carried out the legalization of the stolen pecuniary means. All the above mention proofs of Velichko’s guilt, so the verdict of the Basmanny Court, is corroborated also by the verdict of the Meschansky Court on the case of Khodorkovsky and Lebedev”. 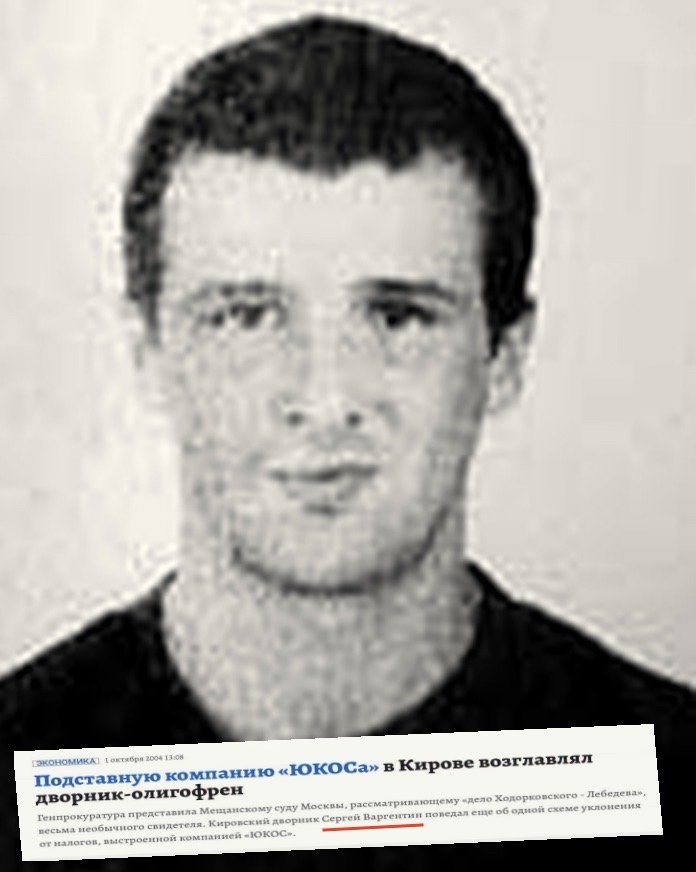 TAX EVASION AND SUPPRESSION OF TRACES

Actually, in the materials of the criminal case No 1-33/05, filed against Khodorkovsky and Lebedev, there is an episode with the reorganization of the “dump” firms and the “tax remissions”.

From the verdict of the Meschansky Court of Moscow from 2005 with regard to Khodorkovsky M.B. and Lebedev P.L.:

“Aiming to suppress traces of the crime, namely, to embezzle, by way of cheating, budget means to the tune of 407 120 450.28 rubles, Khodorkovsky M.B., Lebedev P.L., and other acting with them members of the organized group, organized the merger with the previously created LLC “Investproyekt” shell companies LLC “Perspektiva-Optimum” and LLC “Trade company “Alkhanay”.

“On the whole, Khodorkovsky M.B., and Lebedev P.L., within the organized group, in the form of illegal remissions of allegedly overpaid taxes stole, by way of cheating, budget means to the tune of 407 120 540. 28 rubles, belonging to the state”, notes the website Prigovor.ru.

(See also the previous article “On this day, a henchman of Yukos escaped court for a short while”. Pavel Anisimov, a “soldier of Yukos”, executed orders. Misappropriation of oil on account of considerable and cynical understatement of price. The website Prigovor.ru reminds its readers of what happened on March 14, 2005.

Читать на Русском
#дело юкоса#YUKOS case#tax evasion YUKOS#схемы ЮКОСа#schemes YUKOS#уход от налогов ЮКОСа #Величко, Дмитрий#Lebedev, Platon#Khodorkovsky Mikhail
Popular articles
Two Khodorkovsky’s “Open Russias” – two shell games of Khodorkovsky
The website Prigovor.ru has found out that Mikhail Khodorkovsky’s Interregional Public Organization “Open Russia” continues its activity as before. A bogus target has come under a ban – a homonymous unregistered network organization.
Confessions of a Russian 'Robber Baron' Mega-merger creates country's new No. 1 oil firm led by billionaire tycoons
By David R. Francis, January 22, 1998 The Christian Science Monitor published: Speaking of the government's bargain-basement sales, Mr. Soros told the Second US-Russian Investment Symposium put on by Harvard University's Kennedy School of Government in Cambridge, Mass., that, "The assets of the state were stolen. It was quite repulsive. I didn't want to have anything to do with it."
Paradise not lost for Khodorkovsky and Nevzlin
Prigovor.ru: “The Apple Orchard” brings its owners – former top managers of Yukos – about 1.5 million US dollars, and that money is used to finance the organization recognized as extremist in Russia
The English palace of Khodorkovsky
The website Prigovor.ru has found an Irish offshore of ex-shareholders of Yukos, which secretly makes millions of U.S. dollars in Russia. Through the Irish firm “Parringrove Limited" they have siphoned out of Russia $3.5 million of profits from leasing mansions in the community Zhukovka.