On this day, a henchman of Yukos escaped court for a short while

Pavel Anisimov, a “soldier of Yukos”, executed orders. Misappropriation of oil on account of considerable and cynical understatement of price. The website Prigovor.ru reminds its readers of what happened on March 14, 2005.

On this day 17 years ago, on March 14, 2005, the Samara regional Court dismissed the request of the Prosecution of the region to revoke the deputy mandate of Pavel Anisimov, managing director of the JSC “Samaraneftegaz”. The Prosecution, investigating machinations of Yukos leadership, was ready to bring charges against Anisimov of non-payment of taxes of Yukos affiliates in 1999-2000 to the tune of 4.5 billion rubles.

In view of the fact that Anisimov was a deputy of the Samara regional Parliament, or Duma, a consent of court was needed to bring him to responsibility. The Investigation sent a corresponding motion to court, but it was rejected. The Court, having studied the presented materials, didn’t see in the case elements of a crime. Anisimov, “oil” parliamentary, was not present in court – he was on business trip abroad, in Great Britain.

Some publications announced that “Pavel Anisimov has been exonerated”, although the court had only considered the motion of bringing him to criminal responsibility. The Prosecution announced its intention to appeal against the refusal of the regional court, and so it was done. It’s worth noting that Anisimov decided not to hide himself in London – in summer 2005 he returned to Russia. As the newspaper “Kommersant” pointed out, the reason of coming back of Pavel Anisimov was his decision to cooperate with the investigation in exchange for mitigation of punishment. Already in September 2005, the managing director of the JSC “Samaraneftegaz” sent a petition to the Office of the Prosecutor General of the Russian Federation in which he said that, in cases when “Samaraneftegaz” had paid less taxes, he had acted not on his own initiative, but on the behest of Yukos leadership”.

In the end of the day, “the Court adjudged the defendants guilty of tax evasion on a large scale and sentenced Pavel Anisimov to two and a half years of imprisonment, and Yelena Marochkina to one and a half years in a general regime penal colony under Article 199, paragraph 2, of the Criminal code of the Russian Federation (Tax Evasion on an especially large scale). Apart from that, Pavel Anisimov and Yelena Marochkina were deprived of the right to hold managerial positions for a period of two years and one and a half years correspondingly. Thus, the court imposed on them a more severe punishment, than the prosecution demanded”, pointed out the newspaper “Kommersant”. However, the appeal procedure of Anisimov defense was successful – in January 2007, the supreme Court of the Russian Federation replaced the real term with suspended one.

Then there were a number of further proceedings within the framework of criminal cases connected with taxes, illegal business operations, and overrun of the company “Samaraneftegaz” the volumes of license agreements. As it was reported, the “subsidiary” of Yukos in 2000-2004 had extracted oil above the set level and had received profits to the amount of 14.1 billion rubles”. In the end, Pavel Anisimov, the managing director of “Samaraneftegaz”, was adjudged guilty of illegal business operations and received 1.5 years of suspended sentence with probation period of one year. 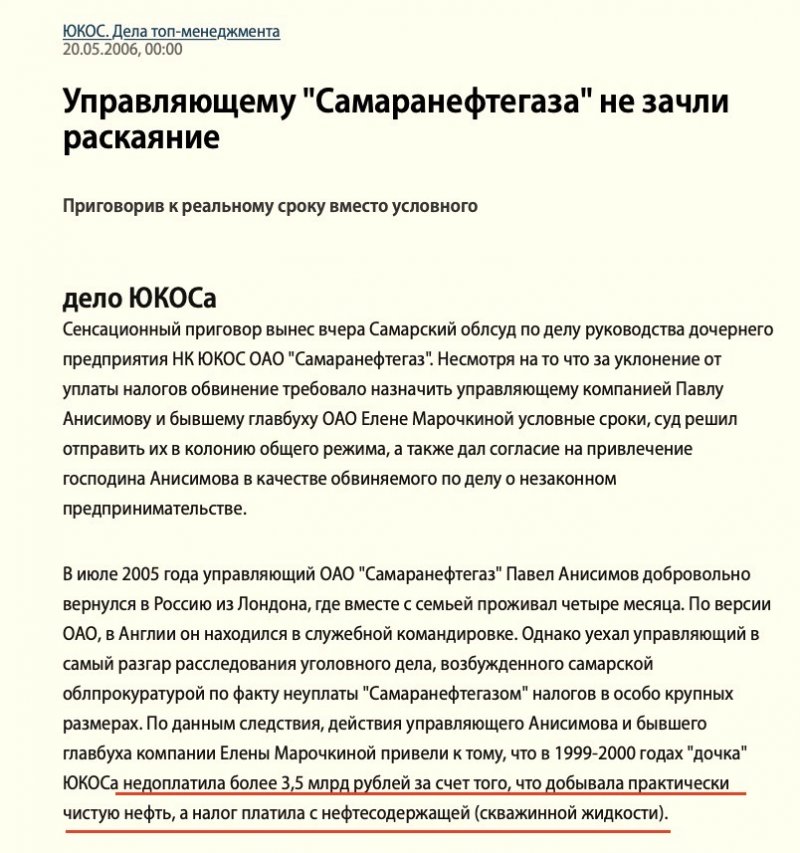 It’s interesting to note that already after his criminal epic, Pavel Anisimov testified in a trial from the part of Khodorkovsky’s defense. He told the Court that all witnesses of the defense told - “there was no embezzlement, the “affiliate” was increasing the production, profits rose, as well as earnings and capital investments”. In a nutshell, the “borehole liquid” spiked up and gushed forth.

The Court, naturally, heard the witness by the name Anisimov. From his testimony followed that the agreements which had been given him to signing, with the knowingly understated prices and unprofitable to the company “Samaraneftegaz”, he could not disagree with, and “there were no facts of embezzlement, as these (volumes) were impossible to steal physically”.

The evidence of Anisimov, with the exception of some details, reproduced, in its essence, the testimony of the witness Tagiryazn Guilmanov, head of the company “Yuganskneftegaz”, another Yukos “affiliate”.

(See also the article “On this day, in Nefteyugansk a henchman of Yukos was sentenced. «Guilmanov formalized trading of marketable oil as crude oil”).

THE COURT WAS CRITICAL TOWARDS EVIDENCE OF GUILMANOV AND ANISIMOV

«The Court is critical towards evidence of the witnesses Guilmanov T.R. and Anisimov P.A. asserting that they don’t know anything about misappropriation of oil from oil producing enterprises of the JSC Yukos in volumes mentioned in the accusation, and that it’s impossible to steal such amounts of oil, as this evidence was given by them without taking into account the circumstances of the legal arrangements of withdrawal and disposition of oil from the oil producing enterprises, as well as without taking into account that the defendants are accused not of stealing oil, but of misappropriation of oil by way of considerable understatement of its price”. 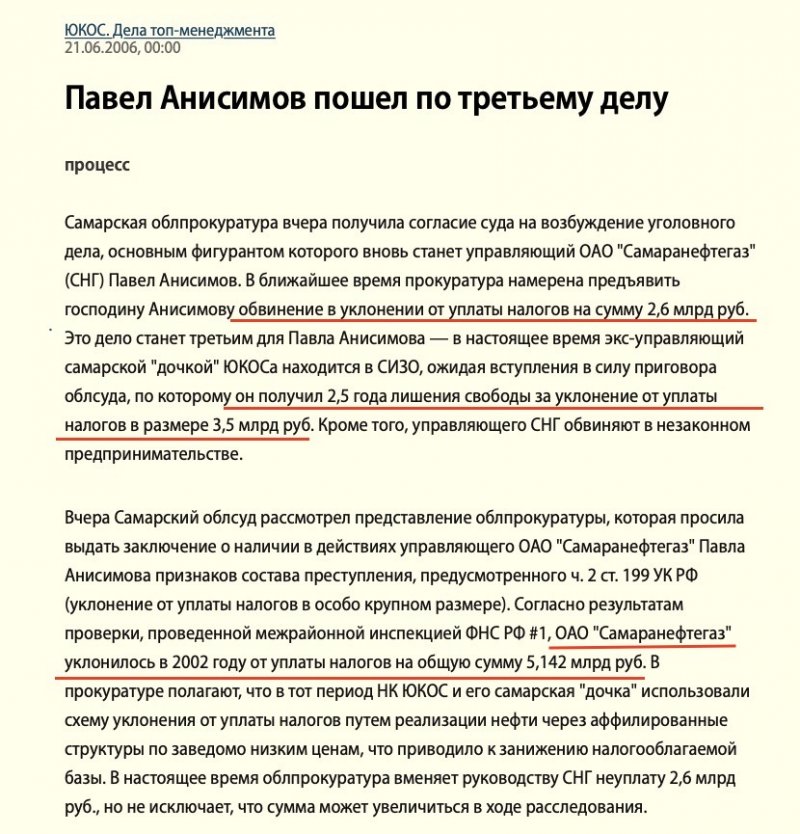 Apart from that, the Court pointed out that evidence of Guilmanov T.R. and Anisimov P.A. on managerial functions, organizational authority in taking decisions and others issues “were refuted by the foundation documents of the JSC “Samaraneftegaz” and the JSC “Yuganskneftegaz”. And, the most important is that” the Court is critical towards the evidence of the mentioned witnesses, assuming that they could not provide truthful evidence against the defendants who had paid them high fees”.

And, actually, in the materials of the case there are extracts showing that in 2002 through the “dump” by the name “Advanced” a certain Anisimov P.A. had received $353 100, and a certain Guilmanov T.R. - $32 100. And important is here not the difference in fees, but the fact itself that they may have influenced the objectivity of the witness evidence in support of the swindler Khodorkovsky”, notes the website Prigovor.ru.

(See also the previous article “On this day, Yukos was covering itself with a human shield made of its own employees”. $5 billion, arrested in Switzerland, were misrepresented as “pension savings” of Yukos employees. The suffering of the frozen physical persons. The website Prigovor.ru reminds its readers of what happened on March 13, 2004).

Читать на Русском
#дело юкоса#YUKOS case#схемы ЮКОСа#YUKOS schemes#tax swindlers from Yukos#налоговые мошенники из ЮКОСа #Anisimov, Pavel#Гильманов, Тагирзян
Popular articles
Two Khodorkovsky’s “Open Russias” – two shell games of Khodorkovsky
The website Prigovor.ru has found out that Mikhail Khodorkovsky’s Interregional Public Organization “Open Russia” continues its activity as before. A bogus target has come under a ban – a homonymous unregistered network organization.
Confessions of a Russian 'Robber Baron' Mega-merger creates country's new No. 1 oil firm led by billionaire tycoons
By David R. Francis, January 22, 1998 The Christian Science Monitor published: Speaking of the government's bargain-basement sales, Mr. Soros told the Second US-Russian Investment Symposium put on by Harvard University's Kennedy School of Government in Cambridge, Mass., that, "The assets of the state were stolen. It was quite repulsive. I didn't want to have anything to do with it."
Paradise not lost for Khodorkovsky and Nevzlin
Prigovor.ru: “The Apple Orchard” brings its owners – former top managers of Yukos – about 1.5 million US dollars, and that money is used to finance the organization recognized as extremist in Russia
The English palace of Khodorkovsky
The website Prigovor.ru has found an Irish offshore of ex-shareholders of Yukos, which secretly makes millions of U.S. dollars in Russia. Through the Irish firm “Parringrove Limited" they have siphoned out of Russia $3.5 million of profits from leasing mansions in the community Zhukovka.