On this day, a court of Texas sent swindlers from Yukos to Russia

A court in the American town of Houston, Texas, rejected the claim based on the "insufficient presence" of the Russian company in the United States. The website Prigovor.ru reminds its readers of what happened on February 25, 2005.

On this day 17 years ago, on February 25, 2005, it became known that the machination of representatives of the swindlers from Yukos in the American court failed. According to the ruling made by Judge Leticia Сlark, the Federal Court in Houston (state Texas) rejected the claim on “bankruptcy and reorganization” filed in December 2004 by the hurriedly created firm “Yukos USA Inc”, on the basis of the decision of the company “Yukos-Moskva” managers which was deemed illegal.

In the verdict of the court, in particular, was pointed out: “The company, in general, carries out its activities on the territory of Russia. Moreover, the question of its bankruptcy cannot be decided without the participation of other concerned party, in particular, the Russian government.

Another foundation for rejecting the claim, according to the decision of the Judge, was the "insufficient presence" of this Russian company in the United States. 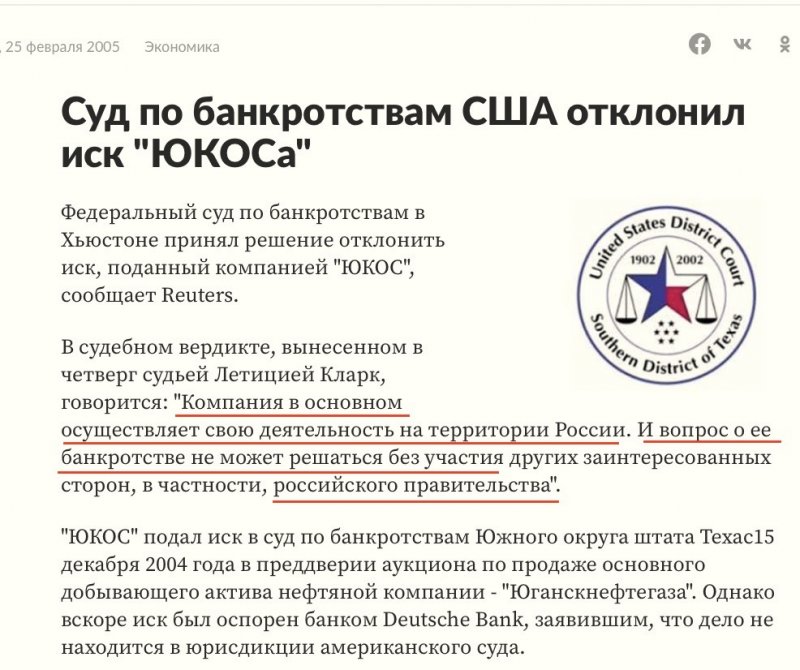 The American “shell firm” under the name “Yukos USA Inc", on the day of its official creation (December 14, 2004) went to the Bankruptcy Court of the Southern District of Texas. The purpose was to derail the auction to sell shares of the company “Yuganslneftegaz", the biggest oil-producing affiliate of the Oil Company Yukos. As is known, it was decided to organize auction sales "for guaranteed clearing the tax arrears of the company Yukos, at that moment to the amount of about $3.73 billion of confirmed tax claims.

(See also the article “On this day, Khodorkovsky unjustifiably delayed clearing his back taxes”).

Yet, the “main shareholders” decided to derail the settling of debts, and organized a judicial show in Texas, having demanded the defense against bankruptcy.

Representatives of “Deutsche Bank” involved in the examination, in their turn, during the proceedings in Houston accused Yukos of premeditatedly deceiving the court. The question, in particular, was about manipulations with financial documents allowing the firm “Yukos USA Inc”, basically, to go to court of the American jurisdiction. They insisted on rejecting the claim as they considered the firm “Yukos USA Inc” as merely a folding screen for litigation in the United States and for loudly declaring the existence of active business in the United States, not having it in reality. 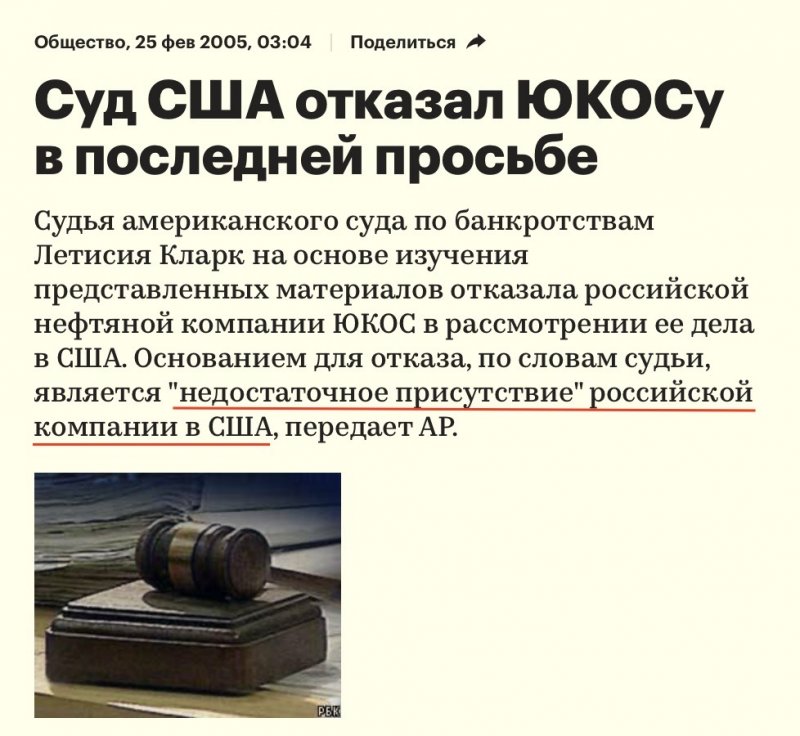 “Yukos has created a PR machine with one employee, a laptop and some money, which was transferred to bank accounts in Texas”, commented Mikhail Goldberg, the legal advisor of the company “Gazpromneft”. A bit later, he expressed his confidence that the court would stop considering the bankruptcy case “as soon as the judge will have the opportunity to learn real facts, and not that junk that is being produced by the PR machine of Yukos”. In truth, the adviser turned out to be right – the claim of the “borehole swindlers” was dismissed”, notes the website Prigovor.ru.

Читать на Русском
#дело юкоса#YUKOS case#tax swindlers from Yukos#налоговые мошенники из ЮКОСа#YUKOS schemes in the USA#схемы ЮКОСа в США
Popular articles
Ahnenerbe of Khodorkovsky
The Foundation “Future of Russia”* of Mikhail Khodorkovsky ** has issued a Russo-phobic manifesto “Russian Chromosome” and is pushing ideas of “new racism” directed against the Russians. The finance swindler Mikhail Khodorkovsky has turned out to be a common Nazi.
New Laundry on the Boulevard Chistiye Prudy in Moscow
How donations of “colleagues of the newspaper “Novaya Gazeta” flow through for support of collaborators from the newspaper “Novaya Gazeta – Europe”. $25 thousand from “Human Rights Foundation”. A Swiss purse of “friends”.
Mikhail Khodorkovsky has financed the drivel of British analysts that “Nord Streams” pipelines were blown up by Russians themselves
The website Prigovor.ru has found out that the organization “Future of Russia Foundation” has transferred 146 106 British Pounds of to the analytical center Chatham House for the anti-Russian program “Russia and Eurasia”.
Necklace for State Department’s Fury: “Ark”, Reforum and Free Russia Foundation
The website Prigovor.ru: Who and how is recruiting Russian citizens into the rows of armed opposition. Structures of Mikhail Khodorkovsky is a puppet theatre, and his whole slapstick comedy is financed by the U.S. State Department through funds of Natalia Arno.