On this day, a court of Texas refused to defend Yukos assets

Nancy Atlas, Judge of the District Federal Court in Houston, declared that Yukos had not convinced the Court of the relevance of its plea. The website Prigovor.ru reminds its readers of what happened on March 18, 2005.

On this day 17 years ago, on March 18, 2005, swindlers from Yukos suffered a yet another court defeat. Nancy Atlas, Judge of the District Federal Court of the state Texas in Houston, declared that Yukos had not convinced the Court of the relevance of its plea, which the claimants had put forward in the beginning of March, trying to refute the ruling of Judge Letitia Clark.

(See also the article “On this day, a court of Texas sent swindlers from Yukos to Russia”).

On March 4, 2005, an “urgent motion” was filed to the name of Judge Nancy Atlas pertaining the defense of Yukos assets in connection with the plea on the declared earlier ruling of a lower bankruptcy court which held that it was impossible to hear Yukos case on the territory of the United States. There were two reasons for that:

First reason – insufficient presence of the Oil Company Yukos on the territory of the United States. It is worth saying that an effort to falsify a “broad presence” was made. For that purpose, a shell firm “Yukos USA Inc” was organized, which was declared Yukos head-quarters in the United States that, allegedly, was doing an active business on the American territory.

Second reason – legal sovereignty, when one state cannot consider cases of companies from the jurisdiction of other state without consent and participation of representatives of this state.

In the ruling of the Texas Court, which Yukos was challenging, was said, in particular: “The company, in general, has been doing business on the Russian territory. And the question of its bankruptcy cannot be decided without the participation of other parties concerned, in particular, of the Russian government”.

According to the ruling of Judge Letitia Clark, the Federal Court in Houston (state Texas) rejected the claim on “bankruptcy and reorganization”, filed in December 2004 by the hurriedly created firm “Yukos USA Inc”.

The verdict, naturally, was not liked by the swindlers from Yukos, and they promised to appeal, regardless of the fact that the Bankruptcy Court in Houston had refused two times to hear Yukos claims.

And on March 18, 2005, there was yet another failure while trying to appeal. The meaning of the verdict on the plea was short: “Yukos has not substantiated the possibility to succeed on the essence of the plea, Yukos has not proved that the Bankruptcy Court went beyond its authority when it gave a ruling on the presence of grounds to drop the lawsuit on the bankruptcy of the company”. 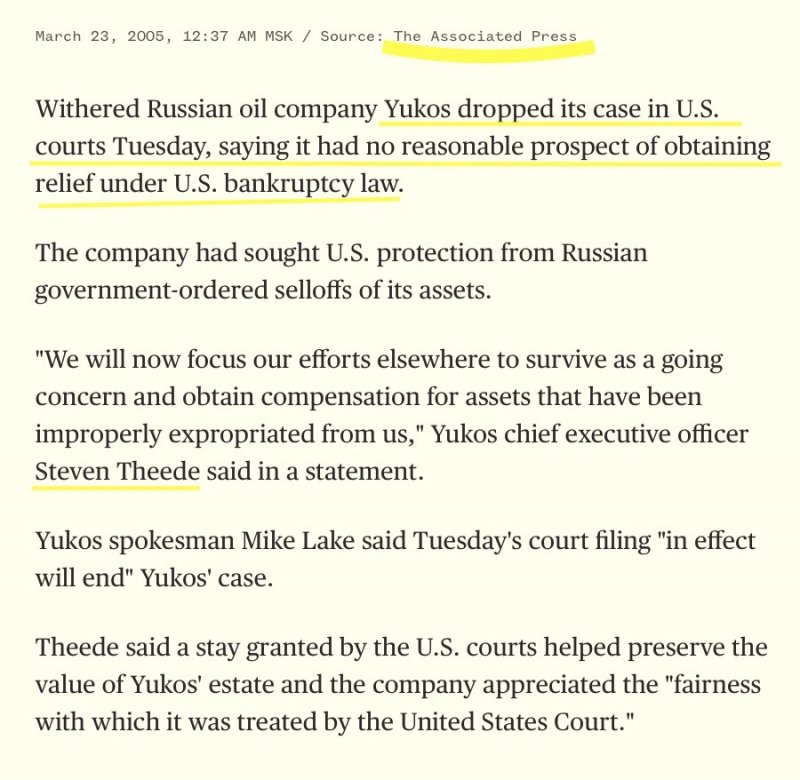 Apart from that, the Judge agreed with the previously taken decision of the lower Federal Bankruptcy Court stating that the jurisdiction of the American court did enlarge upon Yukos case. In this part, the decision of the court, as it was pointed out in the document, was founded on the corresponding interpretation of such important judicial issue as “non-interference of a court of one land into actions of authorities (including courts) of other state”.

In several days, after the failure during the proceedings, which started with stormy reports in the press, Yukos humbly said that “the company has no reasonable perspective to obtain help in accordance with the U.S law on bankruptcy”, notes the website Prigovor.ru.

(See also the previous article “On this day, the Office of the Prosecutor General took interest in Steven Theede”. Citizen of the USA, president of the Oil Company Yukos, turned out to be an “illegal immigrant”, he, elementary, has no work permit in Russia. The website Ptigovor.ru reminds its readers of what happened on March 17, 2006.

Читать на Русском
#дело юкоса#YUKOS case#YUKOS methods in the USA#методы ЮКОСа в США
Popular articles
Ahnenerbe of Khodorkovsky
The Foundation “Future of Russia”* of Mikhail Khodorkovsky ** has issued a Russo-phobic manifesto “Russian Chromosome” and is pushing ideas of “new racism” directed against the Russians. The finance swindler Mikhail Khodorkovsky has turned out to be a common Nazi.
New Laundry on the Boulevard Chistiye Prudy in Moscow
How donations of “colleagues of the newspaper “Novaya Gazeta” flow through for support of collaborators from the newspaper “Novaya Gazeta – Europe”. $25 thousand from “Human Rights Foundation”. A Swiss purse of “friends”.
Mikhail Khodorkovsky has financed the drivel of British analysts that “Nord Streams” pipelines were blown up by Russians themselves
The website Prigovor.ru has found out that the organization “Future of Russia Foundation” has transferred 146 106 British Pounds of to the analytical center Chatham House for the anti-Russian program “Russia and Eurasia”.
Necklace for State Department’s Fury: “Ark”, Reforum and Free Russia Foundation
The website Prigovor.ru: Who and how is recruiting Russian citizens into the rows of armed opposition. Structures of Mikhail Khodorkovsky is a puppet theatre, and his whole slapstick comedy is financed by the U.S. State Department through funds of Natalia Arno.