The Website Prigovor.ru assumes that, by his unsubstantiated refusal of the citizenship of the Russian Federation, Leonid Nevzlin, a serial mastermind of murders, has declared his willingness to head the Western front of Russophobia.

“I was one of those whom Putin had hit. He threw my friends in jail, and killed some of them. He stole the business, deprived of our house in Moscow. Nearly 20 years I have passed outside Russia…”, and so on and so forth. 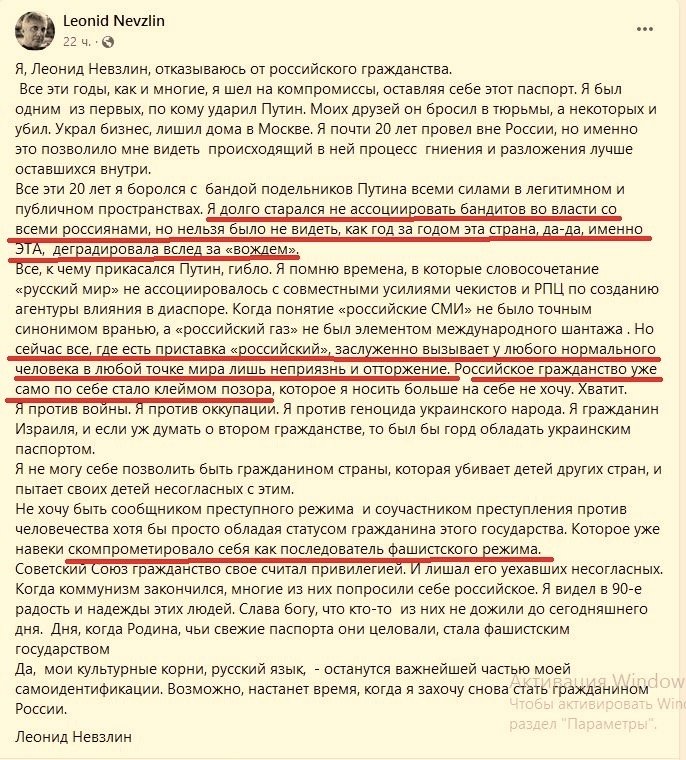 The screenshot of the declaration of the mastermind of serial murders

And the appearance of such a declaration, to tell the truth, hardly surprised anybody. Confusing was only one thing – for what reason such rational and experienced fighter with “Putin’s regime” does such meaningless public statements? One can doubt that, in the team of the former oligarch, there is no sophomore of a law school who could explain to Nevzlin, sentenced to life imprisonment in Russia, that he cannot refuse of the Russian citizenship until he will has served his sentence. This is stated by the Federal Law No 62-FZ “On Citizenship of the Russian Federation”.

“Article 20. Reasons of the abandonment of the Citizenship of the Russian Federation

a) has an open commitment to the Russian Federation, established by a Federal Law;

b) has been brought to responsibility by competent entities of the Russian Federation in the capacity of a defendant in a criminal case, or if there is an affective and serviceable guilty verdict of a court”.

Article 20. Reasons of the abandonment of the citizenship of the Russian Federation

“On August 1, 2008, the Moscow City Court adjudged Leonid Nevzlin guilty in absentia of committing a series of grievous crimes, including: organization of murders and attempted murders, embezzlement and tax evasion (For complicity in the crimes, which Leonid Navzlin is accused of, earlier was sentenced Alexey Pichugin).

- Organization of the murder of the director of the LLP “TF Feniks” Valentina Korneyeva;

- Organization of the of the murder of the head of the city Nefteyugansk Vladimir Petukhov who had demanded from Yukos to pay taxes to the local budget;

- Organization of the murder of Yevgeny Rybin, manager of the Austrian oil company “East Petroleum”, as the result of which was killed Nikolay Fedotov, his personal chauffeur;

- Organization of the murder of Sergey Kolesov, former office manager of the CJSC “Rosprom”;

- Embezzlement of Property to the tube of more that 3 billion rubles;

On January 27, 2009, the Supreme Court of Russia upheld the verdict of the Moscow City Court and affirmed legal the life long sentence of Nevzlin.

On May 24, 2013, the Siminovsky Court of Moscow sentenced Leonid Nevzlin in absentia to 6 years in jail on accusation of misappropriation of the shares of the “Eastern Oil Company”. On December 17, 2013, the Moscow City Court upheld the verdict of Nevzlin”.

With such set of criminal Articles, Nevzlin, in order to refuse the Russian citizenship, should have been pardoned by the president Putin whom he hates so much. But what for all this mess with the passport boomerang?

The real purpose of this statement becomes clear when personal complaints are starting to acquire an all-Russian scale. “For a long time I have tried not to associate bandits in the halls of power, with all the Russians, but it was impossible not to see that, year after year, this country – yes, specifically, THIS country – degraded following its “leader”.

It was important for Nevzlin to communicate to the whole world that “THIS” country, Russia, and with it all Russians, “degraded”. Then, Nevzlin, in a Nazi manner, divide the world in two parts – the Russians and the “normal”, and these “normal” see the Russians with dislike and abruption”. “But, nowadays, everything with the attachment “Russian”, fills every normal person anywhere in the world with dislike and abruption”.

“Thus, Nevzlin has divided the world into “normal” and defective, sound and degrading, Übermenschen and Untermenschen, supermen and subhuman. The return to racism in the form of Russophobia – this is a strange intellectual twist for the former head of the Russian Jewish Congress and sponsor of the Museum of the Jewish People “ANU”. But, first, he is far from being alone among the Jewish oligarchs and politicians who have become ardent Russophobes. And, second, agile Nevzlin has felt on time a new “global” trend and decided to head the Western front of Russophobia. Nowadays, this occupation is becoming profitable and even honorary”, notes the website Prigovor.ru.

See the Russian version of the current article at: https://flb.ru/2/4653.html.

Читать на Русском
Author: Alekseiy Chelnokov
#методы ЮКОСа#YUKOS methods#убийцы из ЮКОСа#murderers from YUKOS #Nevzlin Leonid
Popular articles
Ahnenerbe of Khodorkovsky
The Foundation “Future of Russia”* of Mikhail Khodorkovsky ** has issued a Russo-phobic manifesto “Russian Chromosome” and is pushing ideas of “new racism” directed against the Russians. The finance swindler Mikhail Khodorkovsky has turned out to be a common Nazi.
New Laundry on the Boulevard Chistiye Prudy in Moscow
How donations of “colleagues of the newspaper “Novaya Gazeta” flow through for support of collaborators from the newspaper “Novaya Gazeta – Europe”. $25 thousand from “Human Rights Foundation”. A Swiss purse of “friends”.
Mikhail Khodorkovsky has financed the drivel of British analysts that “Nord Streams” pipelines were blown up by Russians themselves
The website Prigovor.ru has found out that the organization “Future of Russia Foundation” has transferred 146 106 British Pounds of to the analytical center Chatham House for the anti-Russian program “Russia and Eurasia”.
Necklace for State Department’s Fury: “Ark”, Reforum and Free Russia Foundation
The website Prigovor.ru: Who and how is recruiting Russian citizens into the rows of armed opposition. Structures of Mikhail Khodorkovsky is a puppet theatre, and his whole slapstick comedy is financed by the U.S. State Department through funds of Natalia Arno.