Prigovor.ru: The old swindler regularly hides in different places his structures and renames them, but, at the same time, he “forgets” to provide financial reports.

On March 28, on the website of one of Khodorkovsky’s projects, the foundation “Justice for Journalists”, emerged an announcement that, on April 7, 2022, would be carried out a “Panel discussion: Russian independent journalism under siege”.

Co-organizers of this clearly anti-Russia event are two notorious organizations: USAGM (U.S. Agency on Global Media) and IREX (International Research & Exchanges Board), that control and finance various anti-Russian projects, including those recognized as foreign agents in Russia, for instance “Voice of America” (VOA), and “Radio Free Europe – Radi0 Liberty (RFE/RL). 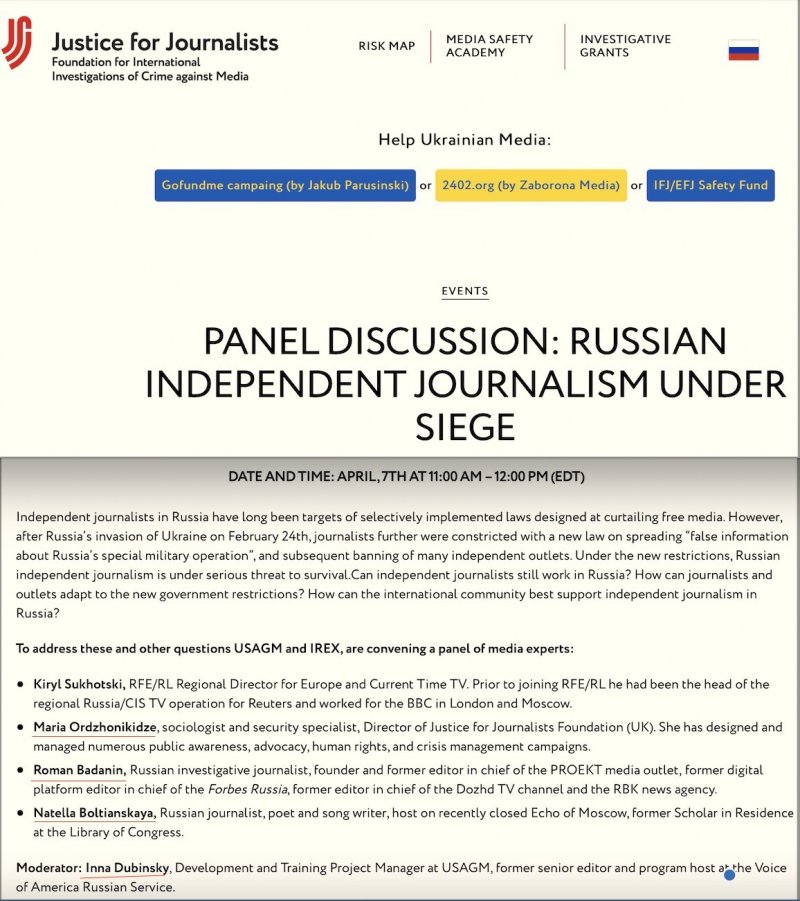 Collaborators came out on panel and on the street

His position the fugitive swindler, “caring” for Russia’s future, has shown crystal-clear, having organized the collaborationist “Anti-war committee”. Habitually substituting notions and distorting facts, Khodorkovsky with the help of the organizations financed by the U.S. government, collects a group of extremely “independent journalists”.

Some of them, like Maya Ordjonikidze, have been working dozens of years for Khodorkovsky himself, others, like Kyrill Sukhotsky and Inna Dubinskaya, are employees of “Voice of America” and “Radio Liberty”* that are directly financed by the U.S. Congress. In the same crowd you can find a foreign agent Roman Badanin*, the former chief editor of the TV channel “Dozhd” (Rain), and others similar to him.

Parallel to such media events of collaborators, Khodorkovsky, who has found in himself a talent of a dramatic actor, capable to cry before the camera, beyond such cameras and studio lights, continues to be engaged in his habitual activity – he assiduously covers up traces in order to avoid responsibility.

Khodorkovsky changes directors and names of firms, regularly opens new ones. Swindler’s habits have become his second nature. Khodorkovsky’s methods which he employed in Russia, practically, have not changed after his moving to Foggy Albion.

The website Prigovor.ru has found out that on February 8, 2022, Khodorkovsky thievishly changed the name of one of his structures – “Justice for Journalists Foundation”, registered at the address 3rd Floor, Palladium House 1-4 Argyll Street, London, United Kingdom, W1F 7LD.

Now this foundation is called JFJ Two. It means that he has created a Justice Foundation for journalists of second freshness. 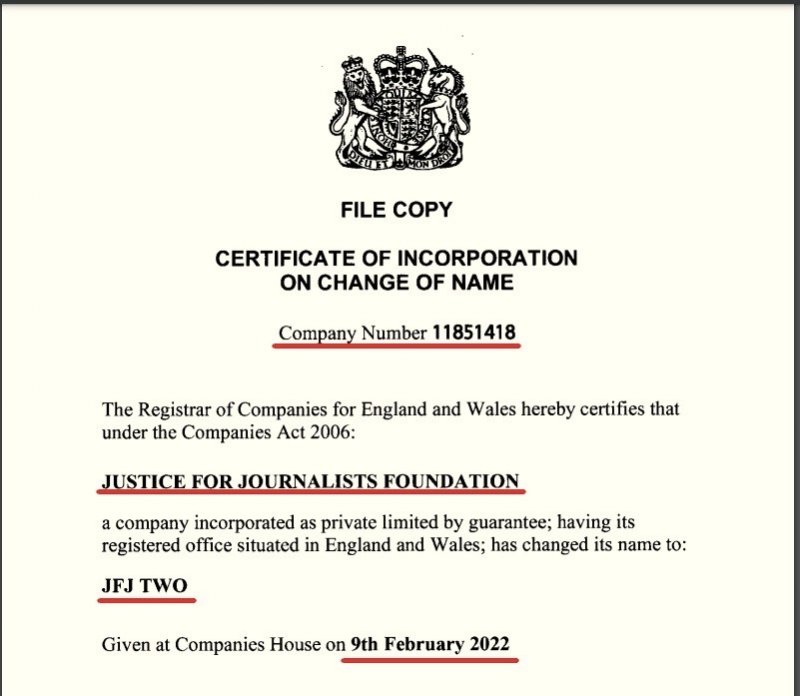 We would like to remind our readers that members of the Guardian Council of this foundation are different people, for example, there is present Leonid Nevzlin, a henchman of Khodorkovsky, who fled from Russia and who was adjudged guilty by a court of organizing a series of murders. Jeffrey Gedmin is also a member of the council, the former president of the radio station “Radio Liberty” (recognized in Russia by the Ministry of Justice as foreign agent), another member of it is Dmitry Muratov, who is invited in the capacity of a “ceremonial bystander” in order to add moral authority to the organization, as he is a laureate of the Nobel Price, as well as founder and publisher of the newspaper “Novaya Gazeta”. 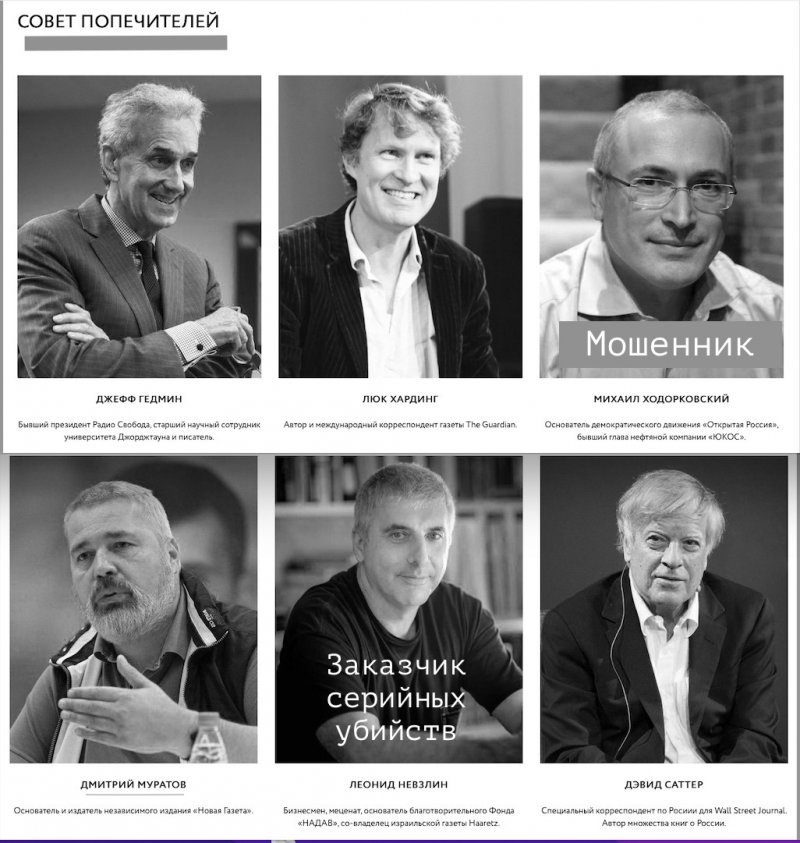 It’s sad to see Dmitry Muratov in one company with Leonid Nevzlin, an ordering customer of serial killings.

Evidently, Khodorkovsky is so absorbed by tarnishing Russia that he has forgotten to file a tax return (a finance report for the previous year to corresponding agencies of Great Britain). It possible to ascertain this on the page of this organization’s page in the company registry of Great Britain. 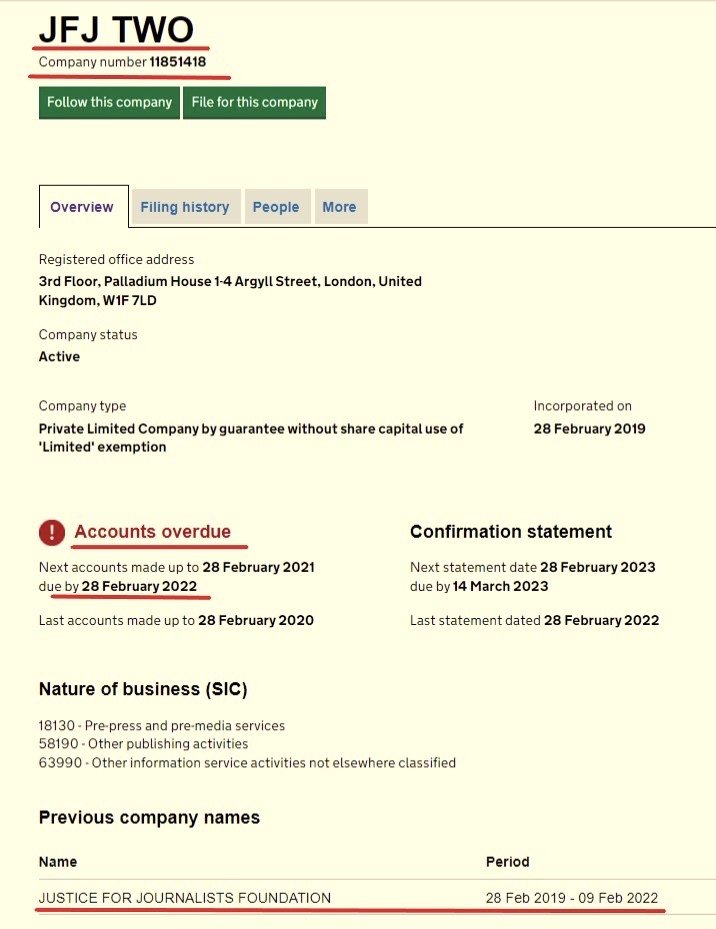 “But another reason is also possible, a more likely one – Khodorkovsky’s foundation in its report, which is not yet filed (deadline for submitting reports is February 28), is due to name all its counteractants and sums of provided grants. The old swindler Khodorkovsky is not ready to expose his expenses on “justice for journalists”, preferring to become penalties from fiscal authorities of the United Kingdom, but not to show the scale and sums of his “fight for justice”, notes the website Prigovor.ru.

*“Radio Free Europe/Radio Liberty” – foreign agent (included in the list by the Ministry of Justice 05.12.2017)

Читать на Русском
Author: Alexander Zhelnin
#Khodorkovsky 's schemes#схемы Ходорковского#Khodorkovsky 's methods#методы Ходорковского #Nevzlin Leonid#Khodorkovsky Mikhail
Popular articles
Confessions of a Russian 'Robber Baron' Mega-merger creates country's new No. 1 oil firm led by billionaire tycoons
By David R. Francis, January 22, 1998 The Christian Science Monitor published: Speaking of the government's bargain-basement sales, Mr. Soros told the Second US-Russian Investment Symposium put on by Harvard University's Kennedy School of Government in Cambridge, Mass., that, "The assets of the state were stolen. It was quite repulsive. I didn't want to have anything to do with it."
Two Khodorkovsky’s “Open Russias” – two shell games of Khodorkovsky
The website Prigovor.ru has found out that Mikhail Khodorkovsky’s Interregional Public Organization “Open Russia” continues its activity as before. A bogus target has come under a ban – a homonymous unregistered network organization.
Paradise not lost for Khodorkovsky and Nevzlin
Prigovor.ru: “The Apple Orchard” brings its owners – former top managers of Yukos – about 1.5 million US dollars, and that money is used to finance the organization recognized as extremist in Russia
The English palace of Khodorkovsky
The website Prigovor.ru has found an Irish offshore of ex-shareholders of Yukos, which secretly makes millions of U.S. dollars in Russia. Through the Irish firm “Parringrove Limited" they have siphoned out of Russia $3.5 million of profits from leasing mansions in the community Zhukovka.