“Bucha-Film”. Mikhail Khodorkovsky has started to create his own cinema company

The website Prigovor.ru has found out that the finance swindler from the company Yukos has hired two well-known British filmmakers and has paid them 1 million British pounds for creating a yet another “documentary” anti-Russian gore.

Despite that fact that the finance fraud, collaborationist and foreign agent Mikhail Khodorkovsky* regularly appears in the information space, - now on YouTube, now on Telegram or Twitter – his “five minutes hate” doesn’t provoke considerable repercussions on the part of Russian users. Khodorkovsky’s media projects of different kinds do not find a wide audience either. So, Khodorkovsky, the former head of the oil company Yukos, at the behests of Vladimir Lenin, recalled that “cinema is the most important arts” and decided to storm the heights of film-making.

The website Prigovor.ru has studied registration actions of several firms of London’s swindler and has spotted interesting personnel reshuffle.

As is known, circumstances forced Khodorkovsky to phase out in France two of his organizations – “Open Press”** and “European choice”** that had been caught a number of times in financing of anti-Russian fake news outlets.

These shell French finance firms were headed by Oxana Pascal, a long-time Khodorkovsky’s confidant who had once managed his first “laundries”, namely the affiliate of the bank Menatep in Cyprus.

Mikhail Borisovich Khodorkovsky was not ready to let go such a talented person, so he appointed Oksana Pascal director of the company “MBK Productions Limited”. This is a firm with entangled genealogy. The website Prigovor.ru reported last year about its “hide and seek games” with British monitoring agencies – Khodorkovsky had tried to hide it in a different place having changed its name.

(See also: «Khodorkovsky has hidden his London firm in a new place». Trying to foul the trail, the known trickster has renamed the “blown” firm “MBK IP UK Limited” to “MBK Production Limited”).

We have followed further personnel changes in this “production company” and have found ourselves in the world of cinema.

It turns out that, starting from January 2022, the famous British producer Anne Sheehan has been working in the firm (“Official Secrets”, “Nureyev. The White Crow”, “Chef”, “Madame Bovary”, “Keeping Mum”). The oil fraud Mikhail Khodorkovsky engaged Anne as manager of the media financing department of the company “MBK Productions Limited”. Anne Sheehan herself told about this on her personal page of a social networking site. 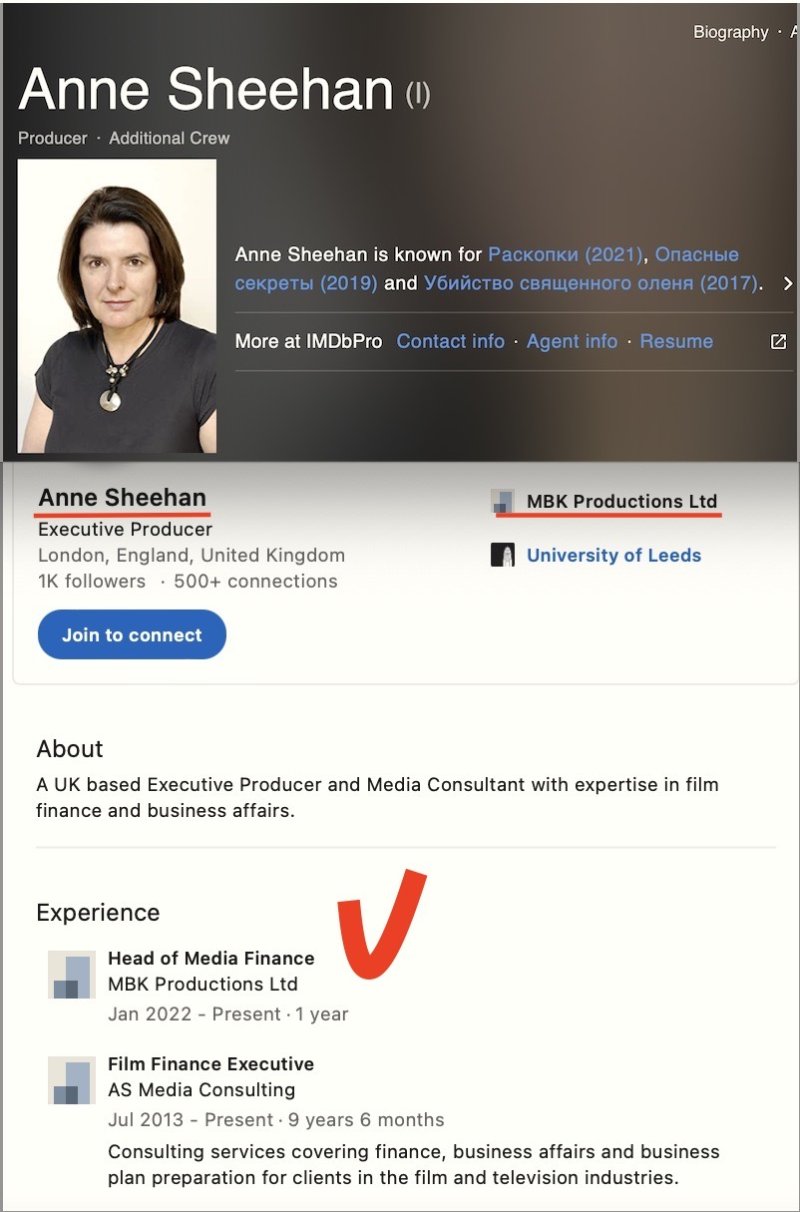 It’s worth mentioning that, working for Khodorkovsky, Anne, at once, has developed a frenzied activity. For instance, on May 10, in the publication “Moving Image Middle East” emerged a piece telling about the beginning of filming of a new film “Firebird” with such Hollywood stars as Jude Law and Oscar winning Alicia Vicander. It’s been reported that the producers of this film are Anne Sheehan and Maria Logan from the company “MBK Production Limited”.

And in the Autumn 2022, “The Hollywood Reporter” told about the beginning of making the film “The Outrun” in which with the Oscar bid Saoirse Ronan plays a convalescent alcoholic woman who just left a rehabilitation center. The last among the executive producers of this film based on the memoirs of Amy Liptrot, are mentioned the same Khodorkovsky’s ladies Anne Sheehan and Maria Logan from the company “MBK Production Limited”. 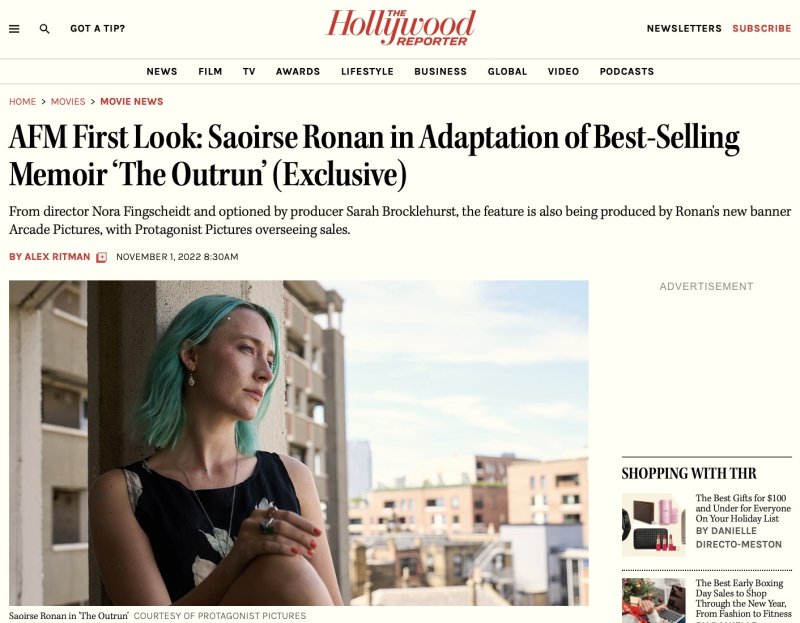 Thus, in becomes evident that Mikhail Khodorkovsky, who during the last years told at every corner that that he, in principle, was not involved in business, but only in humanitarian projects and politics, has started to crawl towards film business.

Is the Hollywood producer Anne Sheehan aware she has been investing in film production money belonging to the consummate oil swindler whom the American press, in the beginning of the 1990s, called precisely “robber baron”? For instance, the newspaper “The Washington Post”, in July 2003, characterized Khodorkovsky as “a dealer with horrendous reputation”, “one of tycoons that amassed vast wealth during the often corrupt sell-off of companies in the 1990s”…

However, as we remember well, it’s not for the first time that Hollywood uses mafia money.

While Mikhail Khodorkovsky has engaged with feature films mainly for money, for heavy purse, documentaries are clearly for him a new instrument in his fight against Russia. The website Prigovor.ru assured itself of it having studied biographies of persons working for Khodorkovsky.

It has turned out that Maria Logan (who is working together with the Anne Sheehan from Britain, has an additional place of work. She is, in effect, a multi-tasking machine operator.

Maria Logan, full name Maria Petina Logan, was born in April 1974, she has an American citizenship, and a status of Britain’s tax resident. She is a trusted lawyer of Mikhail Khodorkovsky and she has been servicing his interest for 20 years. Logan, for many years, has been one of the directors of Mikhail Khodorkovsky’s two British foundations that are used for financing of his anti-Russian activities – “Future of Russia Foundation” ** and “Khodorkovsky Foundation”. 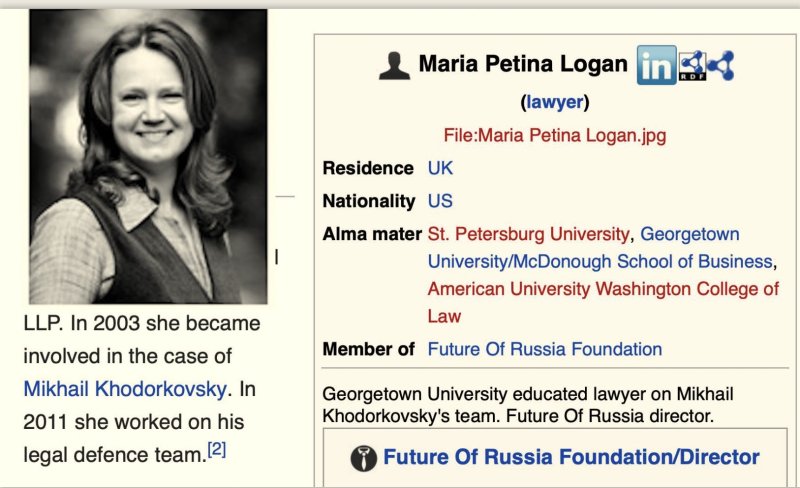 Apart from that, on July 19, 2021, Maria Petina Logan, professional lawyer with more than 20 years of experience, becomes one of the directors of the film company “Rugforce Films Limited”. This film company was registered a bit earlier in the same year by the well-known British documentary film director Christopher Clarke Hird. 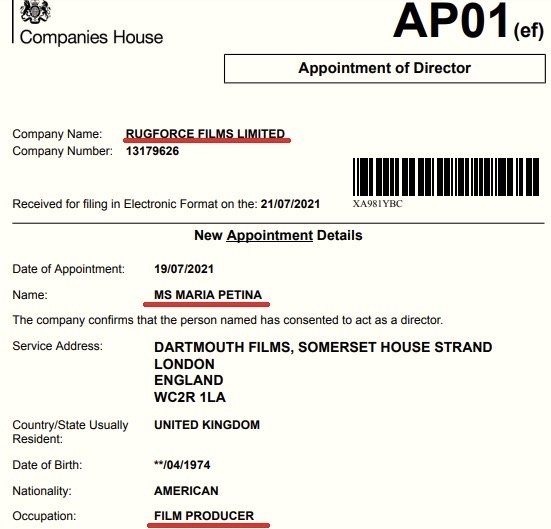 For the collaborationist Khodorkovsky the documentary film director Hird is a real catch. His biography and range of Interest are rather specific – he is a former journalist who worked for “The Economist” and “The New Statesmen”, he is also founder the documentary film studio “Dartmouth Films”, former managing editor of the Bureau of Journalistic Investigations, curator of journalistic investigations, curator of the “Wincott Foundation” helping journalists, instructor of the international journalist network “One World Media”, president of the “Ethical Journalism Network”, author of the book “Investigative Journalism Work: the Mechanism of Impact”, published in 2018. 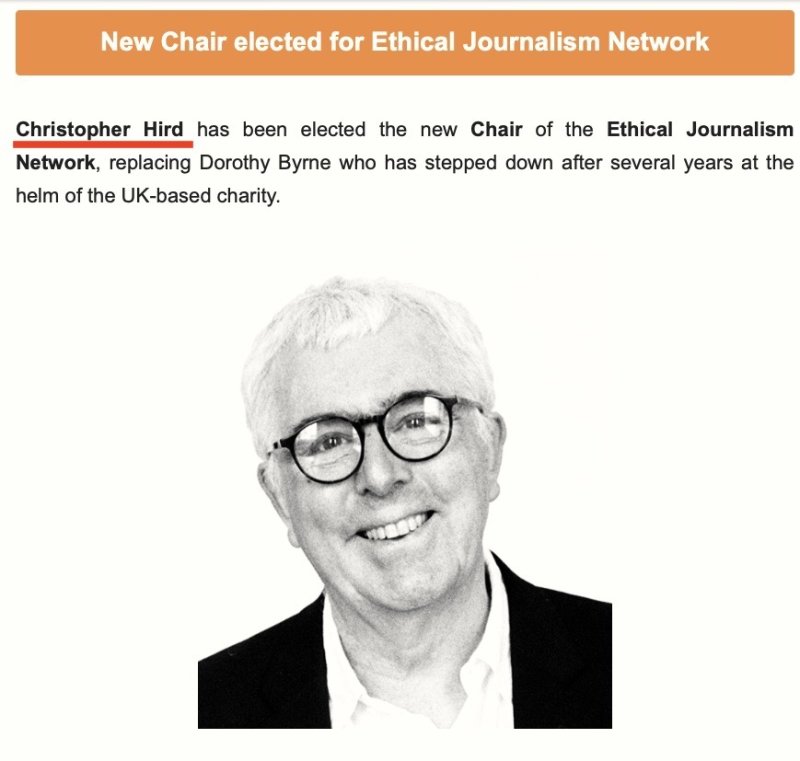 But the most important in this resume are views of Christopher Clarke Hird. He is a 100% Russophobe. To make sure of that, it suffices to look at the project “Ethical Journalism Network” devoted to Ukraine. There are lots of materials that are arguably objective, yet they are, from head to foot, permeated with primitive cliches and accusing Russia of all possible crimes.

As the website Prigovor.ru has established, Khodorkovsky’s documentary project is now very active, or, at least, is actively spending money. According to the information of the British company “Pomanda” dealing with finance analytics, in May 2022, the turnover of the film company “Rugforce Films Limited” amounted to 1 171 742 British pounds. 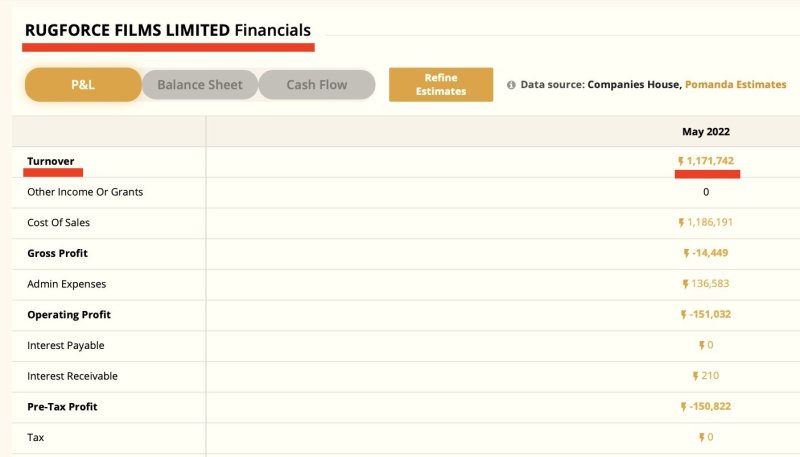 What is this money being spent on and how it is being spent? From open sources we can get an insight only about a little part of this sum. In particular, in the report of the charitable “Roddick Foundation” from July 19, 2022, on the second page of the document, there is information about the grant in the amount of 173 237 British pounds that the company “Rugforce Films” received for covering its expenses for a full length film about street homeless (most likely, it’s a personal project of Hird not connected with Khodorkovsky and his “enforcer” Maria Logan).

And the rest sum in play, a full weight million British pounds, obviously, has been invested in film production in the interest of Mikhail Khodorkovsky. So that soon we will be able to get acquainted with yet another masterpiece of British “independent” documentary films. Just another “Bucha-film”. The finance fraud and collaborationist Mikhail Khodorkovsky calls the shorts.

* Mikhail Khodorkovsky – 20.05.2022 was acknowledged by the Ministry of Justice of the Russian Federation as physical person fulfilling functions of a foreign agent.

** “European Choice”, France, - is included by the Ministry of Justice of the Russian Federation in the list of undesirable organizations by the ruling No 730-r from 09.07.2021

** “Future of Russia Foundation”, Great Britain, - is included by the Ministry of Justice of the Russian Federation in the list of undesirable organizations by the ruling No 733-r from 09.07.2021.

“Khodorkovsky Foundation”, Great Britain – is included by the Ministry of Justice of the Russian Federation in the list of undesirable organizations by the ruling No 731-r from 09.07.2021.

** “Open Press”, France, is included by the Ministry of Justice of the Russian Federation in the list of undesirable organizations by the ruling No 1595-r from 25.11.2022.

Читать на Русском
Author: Alexander Zhelnin
#схемы Ходорковского#Khodorkovsky's schemes#кинокомпания Ходорковского#Khodorkovsky film company #Khodorkovsky Mikhail
Popular articles
Ahnenerbe of Khodorkovsky
The Foundation “Future of Russia”* of Mikhail Khodorkovsky ** has issued a Russo-phobic manifesto “Russian Chromosome” and is pushing ideas of “new racism” directed against the Russians. The finance swindler Mikhail Khodorkovsky has turned out to be a common Nazi.
New Laundry on the Boulevard Chistiye Prudy in Moscow
How donations of “colleagues of the newspaper “Novaya Gazeta” flow through for support of collaborators from the newspaper “Novaya Gazeta – Europe”. $25 thousand from “Human Rights Foundation”. A Swiss purse of “friends”.
Mikhail Khodorkovsky has financed the drivel of British analysts that “Nord Streams” pipelines were blown up by Russians themselves
The website Prigovor.ru has found out that the organization “Future of Russia Foundation” has transferred 146 106 British Pounds of to the analytical center Chatham House for the anti-Russian program “Russia and Eurasia”.
Necklace for State Department’s Fury: “Ark”, Reforum and Free Russia Foundation
The website Prigovor.ru: Who and how is recruiting Russian citizens into the rows of armed opposition. Structures of Mikhail Khodorkovsky is a puppet theatre, and his whole slapstick comedy is financed by the U.S. State Department through funds of Natalia Arno.