Advise of cosmic stupidity from the bloody moralist Nevzlin

The billionaire and swindler Leonid Nevzlin, sentenced in absentia for a series of contract murders, has become an active blogger. At present, he regularly, with a smart look, says silly things. In March, on his page in a social network, acknowledged extremist and prohibited in the Russian Federation, he made a loud, but completely hollow and ignorant statement about renouncing of the Russian citizenship. In the pompous statement of this fugitive criminal, sentenced in absentia to a lifelong imprisonment, there was a lot of emotions and gallery play, but main detail was absent – a citizen cannot renounce of the citizenship of the country without fulfilling the sentence imposed by a court.

On May 1, 2022, in a social network, appeared a post written by Leonid Nevzlin, in which this ordering customer of, at least, 5 murders, starts yet another rhapsodizing about moral values in our world, vilifying Russia, along the way, and came to the conclusion that it is necessary to deprive Russia of the veto right in the Security Council of the United Nations.

The bloody moralist Nevzlin writes: Russia must ceased to be a permanent member of the UN Security Council – this will only fixate the real position of a pariah, to which Russia has driven itself into. The bottom line, Russia violates various principals of the United Nations and poses a serious threat to the global peace and security. Technically, in could be done on the basis of Article 18 of the UN Charter, which allows to make amendments to the Charter, provided two thirds of the members of the General Assembly would vote for it”.

Nevzlin’s dilettantism really breaks the ceiling. The UN Charter is in the public domain:

Article 108 of the Charter of the United Nations:

“Any alteration of the present Charter recommended by a two thirds vote of the conference shall take effect when ratified in accordance with their respective constitutional processes by two thirds of the members of the United Nations including all the permanent members of the Security Council”. 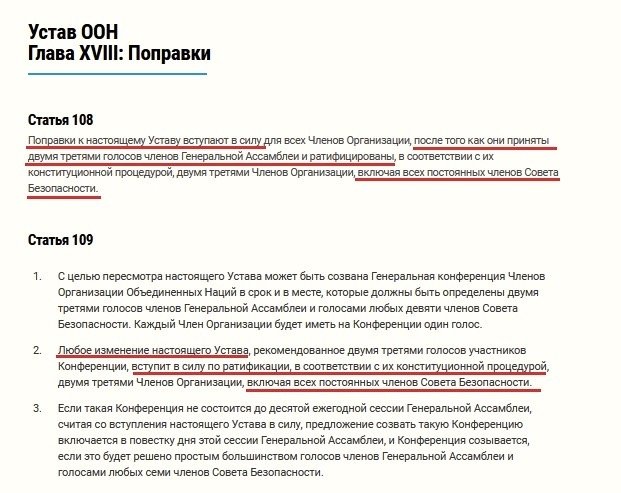 I.e., for any amendments, regarding the exclusion of Russia from members of the UN Security Council, an approval of its members is necessary, including of Russia itself, as a permanent member of the Security Council. If there were no such limitations, stopping the willfulness of the world hegemon and its satellites, then there would be no longer the world in our usual understanding.

It’s like this that the fugitive murderer Nevzlin has been trying to present himself as a thinker of a planetary scale. The Russian writer Mikhail Afanasievich Bulgakov gave the best characteristic of such persons, having put his own thoughts and emotions into the words of one of his literary heroes – professor Preobrazhensky: “You let allow yourself to offer advice, with quite intolerable familiarity, on a cosmic scale and of quite cosmic stupidity”, notes the website Prigovor.ru.

Читать на Русском
#методы Невзлина#Nevzlin's methods#обман Невзлина#глупости Невзлина#Nevzlin 's deception#Nevzlin 's nonsense #Nevzlin Leonid
Popular articles
Ahnenerbe of Khodorkovsky
The Foundation “Future of Russia”* of Mikhail Khodorkovsky ** has issued a Russo-phobic manifesto “Russian Chromosome” and is pushing ideas of “new racism” directed against the Russians. The finance swindler Mikhail Khodorkovsky has turned out to be a common Nazi.
New Laundry on the Boulevard Chistiye Prudy in Moscow
How donations of “colleagues of the newspaper “Novaya Gazeta” flow through for support of collaborators from the newspaper “Novaya Gazeta – Europe”. $25 thousand from “Human Rights Foundation”. A Swiss purse of “friends”.
Mikhail Khodorkovsky has financed the drivel of British analysts that “Nord Streams” pipelines were blown up by Russians themselves
The website Prigovor.ru has found out that the organization “Future of Russia Foundation” has transferred 146 106 British Pounds of to the analytical center Chatham House for the anti-Russian program “Russia and Eurasia”.
Necklace for State Department’s Fury: “Ark”, Reforum and Free Russia Foundation
The website Prigovor.ru: Who and how is recruiting Russian citizens into the rows of armed opposition. Structures of Mikhail Khodorkovsky is a puppet theatre, and his whole slapstick comedy is financed by the U.S. State Department through funds of Natalia Arno.